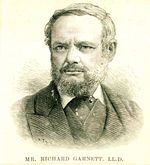 Richard was born in Lichfield, Staffordshire, on 27 January 1835, son of Richard Garnett and his second wife, Rayne Wreaks.

Richard's father, Reverend Richard Garrett, worked in the British Museum as a cataloguer with the title Assistant Keeper of Books. Outside of his library duties, he was also a philologist, fluent in many languages, including Italian, German, French, Sanskrit and Hebrew. When he died of a degenerative disease in 1850 his son, Richard, was only sixteen. The Principal Librarian of the British Museum, Antonio Panizzi, offered young Richard a job in honour of his father. In the 1851 Census, Richard, age 16, is listed as a visitor at surgeon, John Ridout's, home. His occupation is Assistant, British Museum.

In 1875, he became Superintendent of the Reading Room.

By 1881, he became the Assistant Keeper of Books and in 1890 he was promoted to Keeper of Printed Books, a position he held until he retired in 1899.

He inherited the gift of languages from his father, translating numerous works from the German, Greek, Italian, Portuguese, and Spanish.

The UPEI Provenance copy of the book, My Study Windows, by James Russell Lowell, has a letter pasted inside, written by Richard Garnett. The letter reads:

Dear Sir [Mr. F. Murray], I regret that the Dublin chap. books ordered on approval from your list have turned out to be duplicates of books already in the Museum. We shall always be glad to receive your catalogues. Yours truly, R. Garnett, Asst. Keeper of Printed Books.