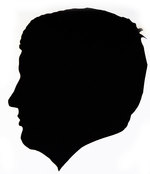 Thomas Hutchinson was born, around 1856, in Newcastle-upon-Tyne, England.

He attended Rutherford College, studying teacher training and graduated in 1877. Thomas began his teaching career almost immediately. He took a teaching position in Pegswood, a Northumberland mining town, and eventually became Headmaster at the school. He remained there until he retired in 1920.

Thomas was also an established poet and wrote for the local paper, The Morpeth Herald. He self published some of his works, and in the 16 June 1888 edition of the Athenaeum Journal, under the heading Literary Gossip we read:

Mr. F. Murray, of Derby, has in the press to be published by subscription, Ballades of a Country Bookworm, by Mr. Thomas Hutchinson.

In that same month and year (June 1888), Thomas paid twenty cents to have his name listed in the The Bookmart under Booksellers' Catalogues Wanted. The journal suggested you list your name with “the kind of Catalogues or Special line of Books interested in". Beside Thomas' name and address he added: Books I buy of all kinds 'neath the sky.

From such statements, Thomas Hutchinson was an avid book collector. He also frequently wrote letters to authors, saved all his correspondence, and was known to attach them to the books and add in newspaper clippings.

UPEI's Provenance Collection copy of My Study Windows includes a letter from the British Museum Assistant Keeper of Books, Richard Garnett, to bookseller Mr. F. Murray (mentioned above). Hidden in the book, under newspaper clippings about the author, is the tiny bookplate of Thomas Hutchinson and his own personal library number, 931.

It seems reasonable to assume, the Dear Sir may indeed be Thomas Hutchinson as he regularly corresponded with authors and added their replies into the books of his vast collection.

An unproven connection might also be found in UPEI's A Club of One where the, Wilmington, Ohio, author creates a poem for Mr. and Mrs. Thomas Hutchinson. There is no Thomas Hutchinson book number associated to it, so it is unclear if it is the aforementioned person.

Thomas Hutchinson died on 28 January 1938. His address at the time of his death was 23 Howard-terrace, Morpeth, Northumberland.

His massive collection of books were disbanded in three waves. First, in 1905, a large part of his collection went to the auction house of Sotheby's. The sale helped finance his son's tuition. In June 1921, a second sale of 978 books were sold through Anderson and Garland Auctioneers, of Newcastle-upon-Tyne. The remainder of Thomas' collection was donated, by his descendants, to the Preston Park Museum in 1973.