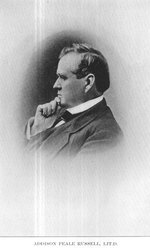 Addison Peale Russell was born on 8 September 1826 in Wilmington, Ohio.

At the age of 16, he took a job as a printer for a local newspaper and by 19, he was the editor and publisher of the Hillsboro News. In the 1850 Census, he is living in a hotel in Lebanon, Ohio and his occupation is listed as Printer.

Addison's youthful years in journalism brought out his interest in politics and before the end of 1850, he is involved as a clerk, in the Ohio Senate.

In 1856, he became a Republican member of the Ohio House of Representatives in the 52nd General Assembly. Two years later, in 1858, he became the Ohio Secretary of State. Addison remained in that position until 1862.

In the 1860 U.S. Census, Addison is recorded at Neil House, a tavern/boarding house across the road from the Ohio State Capitol building. He is listed as 32 years of age with the occupation of Sect (Secretary) of State.

During the American Civil War, Addison worked as the financial agent for Ohio. He was stationed in New York.

According to Henry Howe in his Historical Collections of Ohio, [Russell] “fills out a big suit of clothes, topping off with a high, square collar, well laundried, and white cravat around a plump, full neck, like a gentleman of “ye olden time””.

Sub-Coelum, an anti-materialistic Utopian novel, was probably his most admired book.

Within the copy of his book, A Club of One, Addison wrote a whimsical poem while waiting for his breakfast:

Letter pasted in after “Editor’s Preface”…

The birds did sing, and as did I,
As I did overtake her,
Determined I would show my love
Straightway to Betsey Baker
Ri too rah loo rah, etc.

I seized her round (sound?), I pressed her lips,
She struggled as expected,
Then sweetly cried, “Oh, let me go!”
I did as she directed.
Ri too rah loo rah, etc.

Dear Mr. H.
These are my last nonsense verses- written this very morning, while waiting for my breakfast. They may amuse you and Mrs. H.

Your epistolary prose? gave me very great pleasure. You are a poet; I am only something of a rhymester. Pardon!
A.P.R.

Addison never married. For many years he lived with his sister, Amanda, and her husband William Marble and their two youngest children Catherine and Fanny. At the age of 73, he was living with Amanda's daughter, Catherine [Ralston]. Ten years later, he was living with his 67 year old widowed niece, Clara Burns.

Addison Russell Peale died on 24 July 1912, at the age of 85, in Wilmington, Ohio, the town where he was born. He is buried there in Sugar Grove Cemetery.

Subscribe to Addison Peale Russell RSS feed
Part of: A Club of One (3 objects)
Club of One