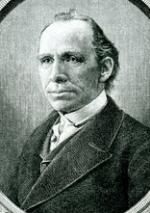 As a young man, Robert came under the employment of Thomas Tarbell & Co., (later Faulkner, Kimball & Co.), on Ash Street in Boston. That company was comprised of Thomas Tarbell and Charles Faulkner. Upon Mr. Tarbell's retirement, he requested that Robert Billings been given 1/4 interest in the firm and Charles Faulkner approved that decision. Robert would work, as a Merchant, for that company his entire life.

On 7 October 1857, Robert married Sarah Elizabeth Hill, daughter of Charles and Sarah W. Hill, in West Roxbury, MA. The marriage was short-lived, as Sarah died in childbirth on 7 July 1859. The child in question also did not survive.

Robert did have a second wife, although no marriage certificate has been found. In the 1870 Census, there is a Robert Billing and Elisa Billing found in Ward 10 in Boston, however age 45 does not match up to this Robert, but the wealth of property and personal estate does fall into line for what is known of him. More telling is Robert's passport application, dated 20 March 1865, at the bottom of the application, is a handwritten note:

Glimpses of Robert's work ethic and career focus is in a book about the Unitarian Church in Roxbury, MA, titled, Some Recollections of the Pastors and People of the Second Church of Old Roxbury, afterwards First Church, West Roxbury:

One day J. H. Billings was in Mr. Faulkner's office in the latter part of the sixties, and they were talking over the men who had made fortunes during the war. Mr. Faulkner said to him, “There is Robert standing at that desk, and he has never done anything else, — he is worth a quarter of a million dollars."

In the 1880 Census, Robert is living alone in Boston. He is listed as a widowed wool merchant, age 61.

Robert Charles Billings died, of cancer, on 12 June 1899 in Boston. In his will, he bequeathed over 1.5 million dollars in public gifts, including: Harvard, M.I.T., Boston Medical Library, various schools and facilities for the blind, aged, and infirm, Wellesley College (where Billings Hall commemorates the generous gift), and the Unitarian Church, of which Robert was a member.

UPEI's provenance copy of Dreamland Visions and other poems by John Wills includes the most ornate inscription of the collection. In highly decorative script is Robert C. Billings Esq. Below the name, in plainer, yet fine penmanship, is written: With the Author's compliments. Unitarian Parsonage. Barnstable. Nov. 21st 1889. The inscription is finished off with an ornate flourish. One assumes this is the fine penmanship of the author, John Wills. A picture is also pasted into the book. It is likely of John Wills, although there is no discovery yet, of a corresponding picture of either John Wills or Robert C. Billings found, to prove the connection.