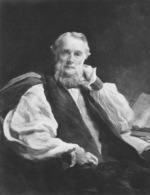 Edward Henry Bickersteth was born in Islington, Greater London, on 25 January 1825. He was the son of Edward Bickersteth and Sarah Bignold.

Edward studied Classics at Trinity College in Cambridge and took Holy Orders in 1848. In a sermon he preached at Exeter Cathedral, during Victoria's Diamond Jubilee, Edward recalled Victoria's royal visit to Trinity College:

It was my privilege, he said, as an under graduate of Trinity, Cambridge, to be one of those who laid down our gowns for her to tread on, as she walked with graceful mirth and words of thanks on her lips, the Prince Consort following her steps from the Master's Lodge to inspect our College Chapel in the autumn gloom. She was pleased to say she had never received a heartier welcome, and oh, how proud we all were to have her under what we called our roof for two nights.

On 6 February 1848, Edward was ordained deacon by Bishop Stanley of Norwich. He preached his first sermon on 1 Corinthians, chapter 1, verse 30: It is because of him that you are in Christ Jesus, who has become for us wisdom from God—that is, our righteousness, holiness and redemption.

Edward's wife, Rosa, died in 1873, when little Irene was only two years old. Edward married again in February 1876, to his cousin Ellen Susanna Bickersteth. They did not have children together, but Ellen would have taken on motherhood duty, as seven of Edward's children would have been under the age of sixteen at the time of the marriage.

His eldest daughter, Emily, reflected the following about her father:

He could be stern upon occasion, but what struck us, even as children, was his saintliness, and his intensely bright and sunny nature. He often said that he had three distinct enjoyments of most pleasures ; anticipation, fruition, retrospect ; and he constantly quoted the sayings “Always sit on the sunny side of the hill, and Never cross a bridge till you come to it”.

In 1885, Edward became the Bishop of Exeter.

Mission work was his main objective and he supported the Church Mission Society and the Society for the Propagation of the Gospel. He traveled to India, Palestine, and Japan, where he became the first Bishop of South Tokyo. He and his family survived the powerful Mino-Owari earthquake at Osaka on October 28, 1891. Edward's daughter, Mary Jane Bickersteth, wrote of their experiences in Japan in the book Japan as We Saw It, published in 1893.

Edward was an accomplished poet, winning the Cambridge University's Chancellor's Gold Medal for poetry three times. He also wrote hymns and edited hymnals. He wrote the Hymnal's Companion to the Book of Common Prayer, as well as numerous other religious commentaries and books of poetry.

Edward died, in London, on 16 May 2006 and was buried at Watton-at-Stone, Hertfordshire, England.

In July 1902, Edward had signed the bookplate in two books, The Early Days of Christianity and The Life and Work of St. Paul (now in the UPEI's Provenance Collection) given to Ethel Hodgson as a reward for memorizing Scripture. In the first book, The Early Days of Christianity, a newspaper clipping was found inside with a picture of Dr. S. Bickersteth (Edward's son) and his wife Ella Chlora Monier-Williams. Under the picture reads:

Golden Wedding: Dr. S. Bickersteth, Chaplain to the King and a Canon of Canterbury, and Mrs. Bickersteth, who have just celebrated their golden wedding. The King and Queen sent their congratulations.