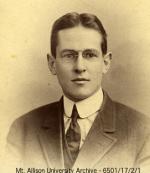 Dr. Winthrop Pickard Bell was born 12 May 1884 in Halifax, Nova Scotia, to Andrew McKinlay Bell and Mary Emerancy Pickard. He had one younger sibling, Ralph Pickard Bell, who would become Mount Allison University’s first Chancellor in 1960.

Winthrop first attended Old Albro Street School, Halifax, Nova Scotia in 1889 and then matriculated into the Halifax County Academy where he was described as:

“...the orator of his class. It was sometimes doubtful who was the real teacher in the
English room. His high aggregate (over 900) shows he knew his books well, particularly his classics for which he won the medal. He is now starting his college career at Mount Allison" (The Academy Annual 1900, pg. 6).

At Mount Allison University, in Sackville, New Brunswick, he worked on his Bachelor’s of Arts with Honours in Mathematics from 1900-1904. He continued with a Master of Arts degree in History, German and Philosophy, graduating in 1907. He continued on at Harvard University, where he received a Masters of Philosophy in 1909.

In October 1911, Winthrop left Canada for foreign study. He attended Göttingen University in Germany to complete his doctoral work. He defended his dissertation on 7 August 1914, the day after World War I was declared. Unfortunately, his Ph.D. would be quickly annulled because of accusations from another student about Winthrop criticizing the Kaiser.

Winthrop was then placed into Ruhleben Prison Camp, an internment camp where he remained until the end of WWI.

After the war ended, Winthrop worked for the Secretary of the Committee for Imperial Defence until 1919.

He sailed back to Canada on 24 February 1920. According to the passenger manifest, he was 5 feet 10 inches tall, 148 pounds, with brown hair and blue eyes.

In May 1922, Winthrop’s Ph.D. was reinstated, eight years after it was originally conferred.

After his return to Canada, Winthrop became an associate professor at the University of Toronto. He was heavily involved in his brother’s timber business, and also became involved in the fishing industry with the Lockeport Company.

On 7 October 1925, Winthrop married Hazel Lawrence Deinstadt at their home ‘Boulderwood’ in Halifax, Nova Scotia. Hazel’s sister, Marguerite, had been married to Winthrop’s brother, Ralph, since 1907.

In 1951, Winthrop became the President of the Nova Scotia Historical Society. His magnum opus, The “Foreign Protestants” and the Settlement of Nova Scotia, was published 4 March 1961.

After his death at his home ‘Drumnaha’ in Chester, Nova Scotia on 4 April 1965, Winthrop Bell’s body was donated to Dalhousie University for the study of atherosclerosis. He also donated his entire personal book collection to Mount Allison University and donated the remainder of his estate to the Mount Allison’s Music Department, in memory of his mother. Winthrop’s ashes are buried in the Old Baptist Burial Ground, Chester, Nova Scotia.

The UPEI Provenance Collection has one of Winthrop’s books titled, The Purple Land by W. H. Hudson. Inside, there is a Mount Allison University Memorial Library bookplate, indicating it came from the library of Winthrop Pickard Bell. It also has Winthrop’s signature that is dated 1949, with the word ‘Chester’ beside it.