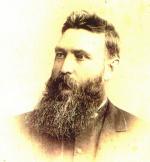 There are some discrepancies surrounding MacLean Sinclair’s birth date; his baptismal record from St. James’ Presbyterian Church, Dorchester indicated that he was born on the 28th of February, while his family history and his son’s memorial in the 1928 edition of Clàrsach na Coille state that it was on the 1st of March.

In Michael David Linkletter’s dissertation about Alexander MacLean Sinclair, he has come up with a possible explanation as to why this discrepancy exists: “it is possible that this incongruity can be explained by the fact that 1840 was a leap year, and that perhaps Maclean Sinclair was born on 29 February” (pg. 73).

In 1848, MacLean Sinclair began formal education in a one-room schoolhouse in Beaver Meadow, Nova Scotia. He graduated from Beaver Meadow School in 1855 and began teaching local schools at the age of 15. After a year of teaching, MacLean Sinclair decided he would continue his education and attended Pictou Academy for two years. As a student, he was described as “regular in his attendance, assiduous in his studies, and maintained throughout the conduct and character of a good student” (“The Pictou Academy and St. Mary’s,” Eastern Chronicle (2 Jan. 1917): 1).

He began teaching again after his time at Pictou Academy. In 1861, MacLean Sinclair attended the Provincial Normal School and graduated as a grammar school teacher.

In 1863, he went back to school and attended the seminary of the Theological Hall of the Presbyterian Church, where he studied theology, church history, Biblical literature, and Jewish antiquities. He also attended Dalhousie at the same time, studying chemistry, political economy, natural philosophy, moral philosophy, and metaphysics.

On 2 May 1866, MacLean Sinclair became a full licensed preacher and was ordained as a minister in the Free Church of Nova Scotia. Afterwards, he became the pastor of Springville and Sunny Brae.

In 1869, MacLean Sinclair travelled to Scotland for four months to become more familiar with his roots. From an early age, MacLean Sinclair was heavily influenced by Gaelic culture and his Scottish background. MacLean Sinclair’s grandfather was a famous Gaelic poet, John MacLean. It was his grandfather and his mother whom he developed his intense interest in Gaelic literature and language, so much so that his services were conducted in both English and Gaelic.

In 1871, MacLean Sinclair was living in Pictou, Nova Scotia with his mother, Christy. His mother would take care of his home until he was married in 1882. Even after MacLean Sinclair’s marriage, Christy would remain a considerable part of his life until her death in 1887.

In 1879, MacLean Sinclair was living in Springville, Nova Scotia when he was visited The Celtic Magazine’s editor, Alexander Mackenzie. Mackenzie described Maclean Sinclair’s library in his magazine:
[. . .] I envied him his magnificent and valuable library ten times more. It is almost impossible to conceive that such a rare collection of valuable books could be met with in such an out-of-the-way place. I believe his collection of Celtic works is the best private one on the American Continent, and a very few indeed surpass it even at home. [. . .] Many people, possessing good libraries, know very little of their contents, but Mr. Sinclair knows every word, and is a thorough master of every idea in his splendid collection (Alexander Mackenzie, “The Editor in Canada,” Celtic Magazine 5.50 (Dec. 1879): 72-73.)

In 1881, MacLean Sinclair published Clàrsach na Coille, a collection of Gaelic poetry and hymns. It also contained all his grandfather’s works.

In 1882, he married Mary Ann Campbell. Both were very affectionate to one another. MacLean Sinclair wrote two loves songs about Mary, and she wrote him a letter on the third anniversary of their wedding, expressing “her fondness for his smile, of which she can remind herself by looking at his “fascinating” photograph” (Linkletter, “Bu Dual Dha Sin” pg. 132)

During his time in East River, Maclean Sinclair became the editor of a Gaelic column in the Pictou News titled “Cùil na Gàidhilg” (“The Gaelic Corner”) which ran from December 1883 to at least January 1888. Also while in East River, Mary gave birth to two of their five children: Charles L. (1885) and John M. (1889).

In 1888, MacLean Sinclair accepted a pastoral charge in Belfast, Prince Edward Island. During their time in Belfast, Mary would have three more children: Christy (1891), George (1895), and Donald M. (1899). He was adamant that the children speak Gaelic in the home as he wanted to preserve the language and traditions that his mother and grandfather passed down to him.

This period would be Maclean Sinclair’s most productive regarding publications. He would publish seventeen books: thirteen volumes of Gaelic poetry, three on clan history, and one on the Peoples and Languages of the World (1894). He would publish his magnum opus, The Clan Gillean, during his time in Prince Edward Island.

In 1907, Maclean Sinclair was offered a position as a Celtic lecturer at St. Francis Xavier University, Antigonish, and Dalhousie University, Halifax. He settled in Hopewell, Pictou County as it was in between both schools. In the same year, he was named an honorary fellow of the Gaelic Society of Canada.

In 1912, Maclean Sinclair retired from lecturing when he was seventy-two.

In 1914, he was awarded an honorary Doctor of Laws degree from Dalhousie University.

In 1916, he celebrated the fiftieth anniversary of his ordination.

On 14 February 1924, Rev. Alexander Maclean Sinclair passed away at his home in Hopewell. He had been failing in health for approximately two years before his death. He is remembered as one of the greatest Gaelic scholars of his time.

MacLean, J.P. A History of the Clan MacLean: From its First Settlement at Duard Castle, In the Isle of Mull, to the Present Period. Cincinnati: Robert Clarke & Co., 1889. Pg. 381.