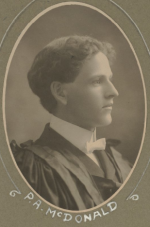 Reverend Pius Augustine McDonald was born on 26 March 1878 to Ann Jane McDonald and Ronald McDonald in Vernon River, Prince Edward Island. He was baptised two days after his birth by Rev. James Phelan. He had at least six siblings, two sisters and four brothers: Margaret, John J., Francis, Roderick (who died as a small child), Ronald J., and Mary Ellen.

Pius had known tragedy early in life as his mother had passed away sometime between 1881-1891. His father remarried sometime between 1891 and 1901 to Mary, Pius’ stepmother. In the 1901 census, he is living at home with his Father, his stepmother, and four of his siblings. He is twenty-three and working as a teacher.

After Pius had attended the district school he went to Prince of Wale’s College and received his teacher’s license. He also attended Saint Dunstan’s University between 1901-1904. While at St. Dunstan’s, Pius was well liked, was a meticulous student and even became the Captain of the football team “...he was a careful, painstaking, and conscientious student, and always took an active part in College activities. He was Captain of the football team --the best ever foregathered on St. Dunstan’s Campus…” (Red & White, 11).

Pius then attended the Grand Seminary in Montreal where he would study theology and prepare for the priesthood. He was ordained on 5 Jan. 1908 by Bishop McDonald in St. Joseph’s Convent Chapel. He then joined the Cathedral Staff where he became the director of the League of the Cross.

Rev. Pius McDonald enlisted in the army on 30 May 1916. He served in both England and France in many regiments. During his time in the army, he was well revered and liked by all. “All who associated with him attest to his great influence for good, his generous giving of himself for the service of others, and to his high and noble character. No doubt he fills an early grave, because he was a martyr to duty.” (Red & White 12).

After the army, he would become the priest of Saint George’s Parish in Cardigan where he would continue teaching and preaching.

Reverend Pius A. McDonald died at the age of 44, in 1922, and was buried in the Saint George’s Roman Catholic Cemetery.

We have attached scans of two books from the UPEI Provenance Collection associated with Pius A. McDonald:

The Early Scottish Church: Its Doctrine and Discipline. by Edmonds, Columba, published in 1906, includes Pius' pink stamped signature, and The life of St. Francis De Sales, which is from Pius' time in Grand Seminary, Montreal. It is signed and dated “Dec. 1907". The book also includes the bookplate of Monsignor G. J. MacLellan.

Other Pius A. McDonald related books in the UPEI Provenance Collection:

Wells, Warre B. An Irish Apologia. Some Thoughts on Anglo-Irish Relations and the War. Dublin and London: Maunsel & Co., 1917. [Pius pink stamped signature twice, plus a bookplate from the Bexhill Library “In Memory of those killed on land and sea, through the actions of the enemy, 1914-1919".]