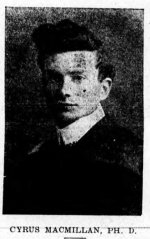 There seems to be much discrepancy regarding the year of Cyrus' birth, with dates on the internet, ranging from 1877-1883. According to PEI Public Archives and Record Office, he was born on 12 September 1877 and was baptized on 12 April 1878. On his WWI Attestation Papers, he lists his birth year as 1881. His tombstone reads 1882, but according to the McGill Archives, Cyrus was born in 1883. The validity of his birth date rests primarily on his birth and baptism records, and therefore his birth year will be claimed as 1877.

Cyrus attended Prince of Wales College in Charlottetown. In 1897, the year of his graduation, he was awarded the Vice Chancellor's Medal, which was annually offered to the top English student at the College.

He was also known as an avid sportsman. According to the 13 August 1929 edition of the Charlottetown Guardian:

Dr. Cyrus McMillan... is fully cognizant of the importance and necessity of “a sound mind in a sound body," and we venture the guess that his faithful physical training and abstenious habits has contributed in no small degree to his great success. The writer remembers that when “Cyrus" was attending P. W. College, a boy of 18 years, he was chief of a gang of kindred spirits, whom he used to take for early morning runs and other athletic feats. He was a leader even at that age.

Cyrus continued his studies at McGill University, earning a B.A. in 1900 and a M.A. in 1903. He entered Harvard University in Cambridge, MA and graduated with a PhD in 1909. Upon completing his PhD, he returned to McGill and became a Lecturer in English. In 1909, he became an Associate Professor at McGill, and in 1923, he was promoted to Chairman of the English department. In 1940, he became Dean of the Faculty of Arts and Science, and he held that position until 1947.

Cyrus served in WWI. In his attestation papers, he lists his mother, Mrs. Isabella Fraser MacMillan, as his next of kin. Her address at the time, in 1916, was 127 Pownal Street, Charlottetown, PE.

His first employment overseas was as Lieutenant of the 7th McGill Battery. He was promoted to the rank of Captain while in England and then promoted again in France, to the rank of Major. At that point, Cyrus was placed in command of the 6th Siege Battery, a heavy artillery corps.

Cyrus fought at the battle of Passchendaele. According to a 2 October 1954 article in the Charlottetown Guardian, “the final proofs [of the Canadian Wonder Tales] were corrected by Dr. MacMillan while he was serving overseas as commander of the 6th Canadian Seige Battery, during the height of the Passchendaele operations".

Cyrus married Margaret Brower, daughter of John L. and Mary E. Brower, and sister to John Eaton Brower. There has been no indication that Cyrus and Margaret had children of their own.

In 1925, Cyrus was chosen to be a representative at the Annual Assembly of the Scottish Church on 19 May 1925, followed by a visit at the United Free Church Scottish Assembly, and then the Irish Assembly of Belfast, Ireland, which met on 3 June 1925. The hotly debated subject was whether the Scottish Church would join in union with the United Church. Cyrus represented the anti-Unionist side of the debate.

The 7 May 1925 edition of the Charlottetown Guardian said:

While on his travels he stayed with his friend, Rev. Dr. George Duncan at his home in Govan, Glasgow, Scotland. Cyrus sailed home aboard the Athenia, leaving Londonderry, Ireland, on 5 June and arriving in Quebec on 15 June 1925.

In June 1930, Cyrus was appointed as Minister of Fisheries by Prime Minister William Lyon Mackenzie King. The following month, he was defeated in the National Election. Ten years later, he won a seat in the Canadian House of Commons, representing Queen's County, Prince Edward Island. He became the Parliamentary Assistant to the Minister of National Defence for Air on 1 April 1943 and remained in that position until 6 June 1946.

Cyrus wrote books four books, Canadian Wonder Tales, Canadian Fairy Tales, Glooskap's Country, and other Indian Tales, and McGill and its Story, 1821-1921. His PhD dissertation was, The Folksongs of Canada, the first Harvard dissertation that focused exclusively on a Canadian topic.

Cyrus' books on the history of McGill University was presented to the future Queen Elizabeth II. The 3 November 1951 edition of the Charlottetown Guardian reported the following:

Prince Edward Island, as well as Dr. Cyrus Macmillan was signally honoured by McGill University presenting the Doctor's opus magnum as a gift to Princess Elizabeth to take with her for her library in Clarence House.

Cyrus died on 29 June 1953. At the time of his death, he was living at 284 Richmond Street, Charlottetown, Prince Edward Island.

The year after his death, his book, Canadian Wonder Tales was presented to Her Majesty Queen Elizabeth II, to give to her children. The book was inscribed to Prince Charles (known then as Duke of Cornwall) and Princess Anne with the following words:

To the Duke of Cornwall and The Princess Anne. May you never lose the dreams of youth and may you always dwell in the spirit in the land of the ever-young. With the compliments of Margaret MacMillan. (Mrs. Cyrus MacMillan, Hillsborough House, Charlottetown, Prince Edward island).

According to the article “Presentation to Royal Children of Island Author's Classic Tales" in the 2 October 1954 edition of the Charlottetown Guardian, the Queen responded to the gift, asking the General Governor to share with Margaret MacMillan, “an expression of her warm thanks for the book which she has pleasure in accepting for her children".