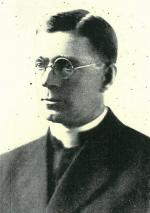 Wilbert Basil MacKenzie, born on 6 December 1888 in Vernon PEI, was the eighth born child of John J. MacKenzie and Elizabeth Currie. He would be one of three sons ordained in the Catholic Church, including Raymond V. MacKenzie.

UPEI's Provenance Collection book, The Poetical Works of Sir Walter Scott, was given to Ray from Wilbert [W.B.] for a Christmas present. There is no year associated with the inscription but Ray is listed as living at 199 Kent Street, in Charlottetown.

Wilbert's early education was at Vernon River Primary School and then on to Prince of Wales College. Upon graduation, he became a teacher and eventually (between 1908-1911) he became the Principal of the Vernon River High School. At some point, he opted for a career change and in 1912, he enrolled in St. Dunstan's College followed, by enrollment in the Holy Heart Seminary in Halifax, Nova Scotia. While there, he studied theology and philosophy.

Wilbert was ordained as a priest at St. Dunstan's Basilica, in Charlottetown, on 6 July 1919. The following Sunday, on July 13th, he performed his first Solemn Mass at St. Joachim's in Vernon River, PEI. His first official assignment took him across the country to the Archdiocese of Vancouver, British Columbia. He would serve in that province for the entirety of his career.

In 1921, he was appointed as the first resident priest of St. Joseph's in Salmon Arm, B.C. and remained in that post until 1926, when he was given charge of Saint Francis of Assisi Church in Revelstoke, B.C.

In 1929, he became Pastor of the Holy Rosary Cathedral in Vancouver and he remained there until 1931 when he was transferred to Kelowna, B.C. and the Immaculate Conception Church. There he was appointed Dean of the Okanagan Valley.

Wilbert is remembered fondly for his dedicated missionary work within the wide-ranged interior of British Columbia.

In 1941, he returned to Prince Edward Island to visit with his family; no doubt he would have attended a service led by his brother Ray.

Wilbert Basil MacKenzie died in on 16 May 1966 in Victoria, British Columbia, and is buried in the Archdiocese of Vancouver.

The UPEI Provenance Collection also includes the book Selected Essays from Sainte-Beuve, edited by John R. Effinger. The book appears to have been used by both brothers during their first years at St. Dunstan's College. Wilbert attended at the beginning of 1912 and Ray started in 1915. The inscription reads:

Photo from the Souvenir Booklet of the Celebration of the Landing of the Scottish Catholics on Prince Edward Island in A.D. 1772 and After, 1922, p.39.