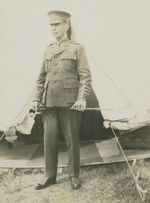 Arthur Alison Bartlett was born in Saint John, New Brunswick, on 5 Nov 1852, to Charlotte and James H. Bartlett. He had at least three sisters: Charlotte, Elizabeth, and Kate. In the 1871 Census he is eighteen, working as a shop clerk, and living at home with his Mother, Father and three sisters in Saint John. At a later point Arthur moved to Prince Edward Island.

Arthur was a commercial agent specializing as a stamp collector and a stamp dealer. He is famous among stamp circles as the proprietor of the largest collection of Nova Scotia and Prince Edward Island remainders. He is also known for his unique business letter-head which were printed in Hamburg, Germany. The stamp facsimiles on the letters were so accurate that the Ottawa Postal authorities, worried that they would be used as forged stamps, banned him from using the letterhead. He fought their proclamation and eventually he was allowed to use what he had printed, but was not allowed to print any more. Today one of the letterhead sheets sell for about $100.

In October 1895, Bartlett wrote an article in the Stamp News publication. In it he highlights the virtues of the Prince Edward Island stamps:

If I have succeeded in making out a good case for the stamp of this beautiful little island, rightly called “the Garden of the Gulf,” and which is undoubtedly the fairest portion of all Canada – the little gem set in a silver sea, which the aboriginal Indian called “Abegweit,” meaning “anchored on the wave” – then has my object been accomplished.

Arthur was largely involved in the military. In 1897, Arthur was a lieutenant in the 82nd Regiment (Abegweit). In June 1902 he was involved in the Royal Salute of 21 guns to honour the end of the Boer War. He obtained the rank of Major. At the outbreak of WWI, when Arthur was in his 62nd year, he was put in charge of transportation and supplies for Charlottetown, District 6.

Arthur was involved in many aspects of community life on the Island. He was the secretary of the Provincial Rifle Association, director of fox farming industry, John R. Dinnis Foxes Ltd, and board President of the Charlottetown Guardian.

According to his obituary in the Charlottetown Guardian, Arthur had a “magnificent library which he was constantly adding to... and had a birthday book containing the signatures of many men of distinction in the world of politics and letters". Many books from Arthur's library made their way to UPEI's Robertson Library's shelves.

Arthur, Margaret and their only child, Mary Florence lived in an elaborate house on 175 Fitzroy Street, in Charlottetown.

On Saturday, 11 December 1920 Arthur was stricken with a fatal seizure. His wife, traveling in Toronto, was immediately called home but she was waylaid in Sackville, NB and did not make it back before her husband's passing. Arthur Alison Bartlett died on Tuesday, 14 December 1920, in Charlottetown, Prince Edward Island.

Two books from Arthur's collection: The Lays of Ancient Rome, with his signature, and The Story of Venice from the series “Medieval Towns", which he signed and dated Sept. 9, 1907, are in the UPEI's Provenance collection.