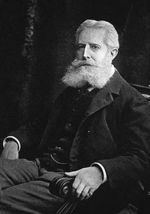 Edmund Clarence Stedman was born on 8 October 1833 in Hartford, Connecticut. He was the son of Major Edmund Burke Stedman and Elizabeth Clementine Dodge. At the age of two, Edmund lost his father to tuberculosis. His younger brother, their mother and Edmund moved in with his strict Calvinist grandfather, David Low Dodge. Mr. Dodge did not want to financially support his grandsons, so they were sent to live with their paternal grandfather, Griffin Stedman, in Norwich, Connecticut. The separation between Edmund and his mother was a difficult one. Letters have survived that indicated Edmund's mother recognized his early talent in poetry. She calls him her poet baby and poet boy.

Edmund studied at Yale University, but was expelled after two years due to inappropriate behaviour. As a new venture, Edmund tried his hand at journalism. He and a friend purchased the Norwich Tribute and the following year, he married Laura Hyde Woodworth, on 2 November 1853. In 1854, he began publishing the Mountain County Herald with partner, Stephen A. Hubbard.

A year later, in 1855, he left the newspaper behind and moved with his young family to New York City.

Edmund and Laura had two sons: Frederick Stewart Stedman, born in 1856 and Arthur G. Stedman, born in 1859. Edmund struggled financially in his first few years in New York. He became interested in Edward Underhill's Unitary Home, communal based living arrangements, where he and his young family could be surrounded by like-minded literary colleagues.

In 1859, Edmund wrote a satirical poem titled The Golden Wedding. New York high society had been fascinated by the highly publicized courtship of a beautiful local teen and a wealthy, significantly older, Cuban planter. The day after the extravagant wedding, Edmund wrote a satirical poem lamenting the loss of virtue in the unscrupulous, materialistic world of social publicity. The Golden Wedding was printed in the Daily Tribune on 18 October 1859. The bride's father was furious and challenged Edmund to a duel but Edmund was able to dodge the attack. A local publisher offered to publish the work as a pamphlet but Edmund had reservations. In a letter to his mother, he wrote:

I consider satire a poetic heresy... but if I consent they will pay handsomely, and I am so poor this Fall I cannot buy winter clothes for my Family

In the end he opted not to have the piece published and instead, focused on his first book Poems, Lyrical and Idyllic, which was published later that year. This book began a prolific run of published and edited works.

Also, in 1860, Edmund took on the position of day editor for the New York World newspaper. The following year, he became a Civil War field correspondent for the World. He was at the devastating Union loss of First Battle of Bull Run in Virginia and was almost killed by a sniper near Williamsburg. In a letter to his mother, dated October 1861, Edmund wrote:

for eight years I have cared nothing for politics- have been disgusted with American life and doings... [but now I am] proud of my country and my grand, heroic brethren

After the war, Edmund opened his own brokerage firm. He also took an interest in finance and became a member of the New York Stock Exchange in Wall Street, from 1865 to 1900.

In 1883, he discovered that his eldest son, Frederick, had embezzled large amounts from the firm, causing a twenty-three year estrangement, which was reconciled only months before Frederick's death in 1906.

In 1904, Edmund was elected for membership in the American Academy of Arts and Letters. He was amongst the first seven chosen for this new honour.

Edmund Clarence Stedman died in his home, as a result of a heart attack, on 18 January 1908. Newspapers announced his death under the title “Banker Poet". His tombstone, in the Woodlawn Cemetery, in Bronx, NY, reads: