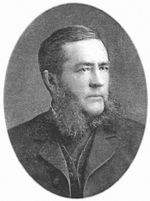 Dennis O’M, as he is often listed in census records, became a Notary Republic in 1852 and two years later, at the age of 25, he became a Law Clerk and Solicitor General for the House of Assembly.

Dennis was a judge for the Kings County Court system from 24 June 1873 until his death on 13 June 1898. He was also very involved in his community, taking on numerous roles, such as: President of the St. Dunstan's Parish Temperance Society, Secretary of the Benevolent Irish Society, Provincial Board of Education member, P.E.I. Historical Society member, 1889 election Revising Officer for King's County, and solicitor for the Legislative Council and Legislative Assembly.

Dennis was 22 years old when he gave his 14 year old brother, Richard, the book. It was the same year, 1852, that Dennis was commissioned as a Notary Republic.

The 15 June 1898 edition of the Charlottetown Herald included The Late Judge Reddin's obituary, which stated:

He [Dennis] was of most genial disposition and was a great favorite in social circles. His qualities of head and heart won him hosts of friends among all classes of people.

Photo:
Photo from The Reddins of Prince Edward Island by Aggi-Rose Reddin, cited above.