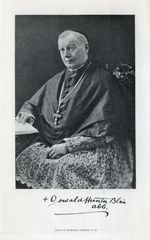 In his obituary, printed in The Tablet (16 September 1939, p.18), Oswald Hunter Blair is described as “a truly Christian soul, filled with the love of God and of his fellow-man for God’s sake”. But this Abbot did not come from humble beginnings, rather he would become one of Scotland’s wealthiest landowners. He was the son of the Sir Edward Hunter Blair, 4th Baronet of Dunskey and Blairquhan, and Elizabeth Wauchope. He had eleven siblings: Alicia, Dorothea, James, George, Edward, Forbes, Walter, Reginald, Helen, Ada, and Gilbert.

David had an elite education, first at Eton College in Windsor and then at Magdalen College, Oxford University, where he received a Master of Arts and built a friendship with Oscar Wilde.

He also spent some time in the military, working up to the rank of Captain but afterwards turned his attention towards the Catholic Church.

In 1875, he visited Rome and was received into the Church. After renouncing his Masonic honours, he was appointed Chamberlain of Sword and Cape to Pope Leo XIII on 14 April 1878.

Back in Scotland, Baron Simon Fraser, 13th Lord Lovat purchased an old military fort, Fort Augustus, and presented the land to the Church for a Benedictine Abbey to be built and organized. David Hunter Blair took a great interest in this new Abbey and he received the Benedictine habit in December 1878. He became Librarian of the Abbey Library and Headmaster of the Abbey School. He took the name Oswald as his religious name. The relationship between Oswald, the Abbey, and the Lord and Lady Lovat explains the signature in the UPEI Provenance Collection book, Henry the Third and the Church:

On 7 October 1896, he succeeded his father as 5th Baronet David Hunter Blair, of Dunskey, but his interests still focused on the Church, rather than aristocracy.

In 1909, he headed to Brazil to help start up a new University in San Paolo. He became a recurring visitor to South America, primarily Brazil and Argentina.

In 1913, Oswald was elected Abbot of the Fort Augustus monastery and he held that post until 1917, when he resigned due to illness.

After his retirement, he turned to writing. He wrote numerous articles for the Catholic Encyclopedia and wrote a series of “Memories”.

Abbot Oswald was fascinated by the Loch Ness Monster and claims to have seen it “gambolling in the deep water and lashing it into a foam with its powerful tail", for a forty minute stretch.

In 1935, Abbot Oswald returned to Rome and discussed the viewing with Pope Pius XI, who was as equally excited to discuss “the monster”.