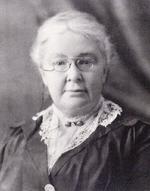 Mabel was born in the early months of 1861, to James Augustus Williams and his wife Emma Louisa Lenny, in Dummer, Hampshire, England. James was a Clergyman and educator. In 1851, he was the Curate of Ashleworth School for aristocratic pupils, some students included the Earl of Coventry and Lord Montgomery.

On 25 January 1869, Mabel's father passed away, she would have been close to eight years old.

By 1881, Mabel was studying at Newnham Hall, North Ladies College, a constituent college of the University of Cambridge.

Mabel devoted her career to education. In the 1891 Census, she is listed as Assistant Mistress at a Ladies High School in Bury St. Edmunds, Suffolk, England.

Mabel eventually became Headmistress at Clergy Daughters School, in Casterton, from 1892-1921. During this time, she signed two books, The Early Days of Christianity and Life and Work of St. Paul, these two books are now in the University of Prince Edward Island Provenance Collection. The books had been given to Ethel Hodgson, as a reward for memorizing Scripture.

Mabel Williams was also President of the Casterton Women’s Institute from 1919-1921.

She died in 1951 in Casterton, Cumbria, England.

Principal Probate Registry for James Augustus Williams. Probate date 15 July 1869. Calendar of the Grants of Probate and Letters of Administration made in the Probate Registries of the High Court of Justice in England. London, England.

Principal Probate Registry for Louisa Florence Williams. Probate date 30 November 1899. Calendar of the Grants of Probate and Letters of Administration made in the Probate Registries of the High Court of Justice in England. London, England.