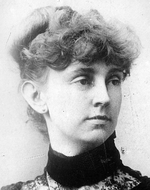 Kate Douglas Smith Wiggin Riggs was born on 28 September 1856 in Philadelphia, to Robert Nash Smith, a lawyer, and Helen Dyer, later Helen Bradbury. Kate is well known as the author of “Rebecca of Sunnybrook Farm” but not as many people realize she was a champion of children's rights and, in particular, free education.

She was quite young when her father died, and her mother, Helen, moved them to Portland, and then Hollis, Maine. Helen remarried to Albion Bradbury and had a son, Philip. Kate studied at Abbot Academy in Andover MA and enjoyed the rural life in Hollis, Maine but in 1873, as a result of her step-father's lung disease, the young family moved to Santa Barbara, California.

Kate took a kindergarten training course in Los Angeles under the instruction of Emma Marwedel, the German founder of the Kindergarten movement in the United States. In 1878, Kate and her sister Nora, started the Silver Street Free Kindergarten, the first free kindergarten in San Francisco, California. They also began their own training school for kindergarten teachers.

Women were required to give up teaching jobs once they were married, so when Kate married Bradley Wiggin in 1881, she stopped teaching at the Silver Street Kindergarten but remained financially supportive. To raise funds Kate began a writing career and gave the proceeds from her stories to the school. Her fundraising stories were The Story of Patsy, written in 1883, and The Birds' Christmas Carol, written in 1887.

In 1888, Kate and Bradley moved from San Francisco to New York but when Bradley died the following year, Kate left New York and moved to her childhood State of Maine. She spent the next seven years rather quietly. She travelled whenever she could and worked on her writing.

In 1895, she married a second time to George Christopher Riggs, who was very supportive of her writing career. She kept her pen name as Kate Douglas Riggs; her output more than tripled and her success flourished. Rebecca of Sunnybrook Farm and it's sequel New Chronicles of Rebecca would be her most well-known work.

Kate also wrote a delightful childhood memoir about a discussion she had with Charles Dickens, at the tender age of eleven. A Child's Journey with Dickens.

On Kate's 1919 US Passport Application her “purpose" for the Passport is listed as Necessary business with book publishers. Her signature on the document matches the signature in the UPEI Provenance copy of Ormond. A Tale:

UPEI's Provenance copy of Ormond. A Tale, is not authored by Kate. Instead, it is a book from her own personal collection, written by Maria Edgeworth, one of the first “realist writers” in children's literature.

On 24 August 1923, Kate died of bronchial pneumonia in Harrow-on-the-Hill, London, England, while she was attending the Dickens Fellowship as a New York delegate. Her ashes were returned to Maine and and scattered over the Saco River.

Kate's autobiography, My Garden of Memory, was published just months after her death.