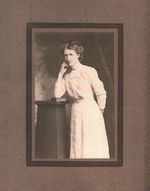 Ethel Hodgson was the daughter of Reverend John Hodgson (1857-1920), Curate of Barton and St. Michael’s, Workington, and later vicar of St. Michael and All Angels Church, Nether Wasdale, Cumberland, from 1892-1920. Her mother was Isabella Norman.

Ethel had three siblings, Norman, Isabella Goodwin, and a half sister Mary Wilhelmina. 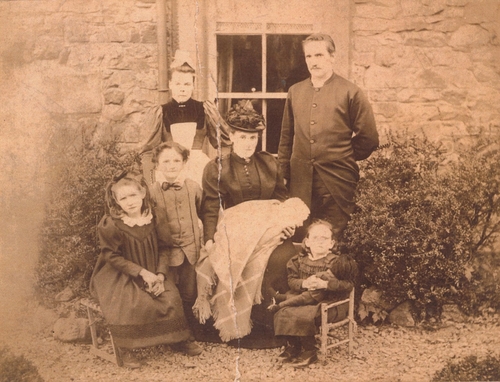 Ethel, oldest daughter, on the left


When Ethel was about four years old, her mother died of tuberculosis shortly after the birth of her sister Isabella.

John, suddenly widowed with three young children, called upon his parents, William and Sarah Hodgson, for help. They took baby Isabella into their home to assist their son. In the 1891 Census John, widow, is living with his five year old daughter, Ethel, three year old son, Norman, and a 54 year old widowed housekeeper, Mary Haughan. Baby Isabella is still living with grandparents William and Sarah Hodgson.

According to Ethel’s niece, Christina Millest, John married again for the sake of his children, but his in-laws felt it was a betrayal, (poor chap!) and would have nothing to do with the stepmother, and persuaded Ethel to think like wise. So Ethel grew up with this family rift from an early age.

The stepmother Christina refers to was Wilhelmina Gibson, from Carlisle, Cumberland, England. Wilhelmina was the daughter of Scottish born parents William and Mary Gibson. Her father was a lithographic artist.

According to the 1881 Census, Wilhelmina was a school-mistress in Clay Lane, Derbyshire. Her experience with children might have been an attractive prospect for John, a young, widowed, father of three. They married in the early years of the 1890’s. By 1894, John and Wilhelmina had a daughter together, named Mary Wilhelmina.

Ethel’s brother, Norman, became an educator. In 1911, at age 23, his occupation is “Assistant Master Secondary” at St. George's school in Harpenden, in Hertsfordshire. Eventually, he became a teacher at St. George's where he met and married the Head Mistress of the School. Norman and his young family moved to Preston, Lancashire, where he became Head Master at Preston Grammar School and remained there until his retirement.

Ethel’s sister, Isabella was born in the early months of 1890. Although she stayed with her grandparents during the first few months of her life, by the time the next census comes around, she is living with her father, step-mother, and step sister Mary. In 1911, Isabella Goodwin Hodgson was boarding in London at the address 99 Hereford Road, Bayswater W., Paddington, London. She was working as a Civil Service Clerk. She died in 1914, age 24, as a result of tuberculosis.

Step-sister Mary Wilhelmina was born in 1894. It appears she also went into teaching. In the 1911 Census, she is seventeen, living with her parents, and a 15 year old domestic servant, Ruth Errington. Mary Wilhelmina is listed as “student (teaching)".

Ethel attended the Clergy Daughters' School in Casterton. This was the same institution that the Bronte sisters attended. Ethel was awarded at least two books for learning scripture: The Early Days of Christianity and The Life and Works of St. Paul, both written by Frederic W. Farrar. Both books have bookplates dedicated to Ethel and signed by the local Bishop, Edward Henry Bickersteth, and the Head Mistress, Mabel Williams. At the time Ethel would have been about sixteen years of age.

According to Ethel’s niece, Christine Millest (daughter of Norman Hodgson), Ethel was a bright girl, she got a degree and trained as a teacher.

In 1911 Census, Ethel is boarding in Kendal, Cumberland, with 75 year old William Pearson, his daughter, Elizabeth, and one domestic servant, Ann Good. Ethel lists her occupation as elementary teacher; a job that runs in the family! 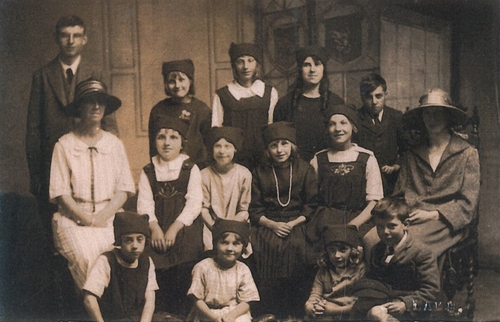 
Christina continues to explain in her letter that, [Ethel] never married. Legend has it that she fell in love with a WWI army officer whom she met when he was in a local Military Convalescent Home, but it never came to anything. She was musical and played the church organ… After she retired she lived in Barrow-in-Furness (Lancashire industrial town, not far from Preston where my father was a Grammar School Headmaster) for many years, but I think her heart was in the village of Wasdale, and she moved back to the area eventually, where she ended her days as an eccentric local spinster with a houseful of cats!

Photos:
Photos, given with kind permission, from Christina Millest.