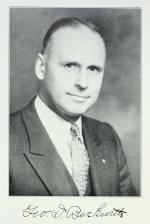 George Derr Beckwith was born on 26 October 1884, in Albion NY (near Waterport). He was the son of Edwin Beckwith and Julia Derr (Beckwith) and he had a brother, Harold.

George attended Syracuse University in 1905 and graduated in 1909. He was a Charter member of fraternity, Sigma Phi Epsilon. Immediately after graduation he became the social director of Chicago Central’s YMCA from 1909-1911. He was also the editor of the YMCA monthly paper during his term in Chicago.

That same year (1911) George became the General Secretary of Kingston NY’s YMCA. During his tenure the YMCA building on Broadway was constructed in 1912. The building was hit by two fires in 1991 and was demolished on 26 November 1991, before it was replaced in 1993.

George was also very involved in the Boy Scouts of America. According to his obituary in the Elizabethtown Chronicle, “He was the first Boy Scout executive to receive the highest award of the Scout Executives Fellowship.”

George was a member of the First Church of God, in Elizabethtown Pennsylvania. He wrote numerous books on the Bible and Biblical prophecy. One book, written by George, is “The American Home and Character Trends” which we have a copy of in the Robertson Library. On the inside cover is written:

George’s wife died in 1950. They had a daughter, Virginia (married name Passon and living in Ann Arbour, Michigan, at time of father’s death) and a son Albert Beckwith (living in Gloversville NY at time of his father’s death). George also had four grandchildren.

In 1951 George married again, this time to Mabel Espenshade.

George died in Lancaster General Hospital, at 9am on 14 June 1958, after a long illness leading to cerebral thrombosis. At the time of death George was living at 23 ½ South Market Street, Elizabethtown (or Lancaster) PA. He was buried in Prospect Hill Cemetery, in Gloversville New York.