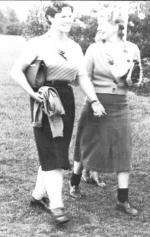 Julia’s parents joined the NSB movement in 1932, her brother Laurens would join in 1934 but Julia became a member of the Oxford Group. She joined in 1931 and during her time with the group, she would travel all over the world to Switzerland, England, Canada, U.S. and Germany. It was through the Oxford Group, when traveling to Germany in 1934, that Julia met Reichsführer-SS Heinrich Himmler and Meinoud Rost van Tonningen. In 1937, Julia left the Oxford Group and became involved with NSB due to her friendships with SS officers, as well as her support of the Great Germanic idea.

Julia then helped found the National Socialist Women’s Organization (NSVO) on 1 September 1938. She and Elisabeth Keers-Laseur, worked together to try and radicalize the NSVO, but Rost van Tonningen, another NSB member, did not trust how much power the women had. He demoted Julia from deputy leader to secretary; he was unable to fire her due to her friendship with Heinrich Himmler. Julia resigned from the NSVO in 1941, unhappy with the demotion.

Himmler then offered Julia an internship at Bielefeld, Germany, which was an education institution for girls. In September 1942, Himmler gave Julia the position of first director of the Dutch Reichsschule für Mädel in Limburg. In 1943, Himmler called Julia away from the school due to her pregnancy, she was unwed at the time. Julia gave birth to her son Heinrich on 26 February 1944, at Lebensbornheim in Steinhöring (Bavaria).

After the war, Julia turned herself over to the Americans in Germany, The Tribunal sentenced her to two and half years in prison in 1948. She would only serve one year, then settle in Germany doing odd jobs. In 1953, Julia married folk artist Michael Sebastian Rothfischer but the marriage only lasted until 1958. During this time, Julia also became a follower of Bhagwan, Ramakrishna, Gandhi and the Dalai Lama.

In Frankfurt, in 1989, Julia’s son Heinrich was found dead in his apartment, there was no known cause of death. A few years later, in 1996, Jonkvrouwe Julia Adriana Op ten Noort died in Fulda, Kassel, Hesse, Germany.