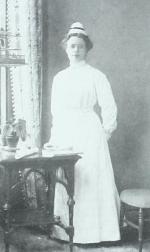 Emeline Catherine Moore MacInnes, born 24 June 1882, was the daughter of Allan MacInnes (1841-1913) & Mary Ann Ross (1850-1935), Prince Edward Island. Both of her parents spoke Gaelic and sang in the Presbyterian Belfast (PEI) church choir in both the English and Gaelic services

Emeline, who preferred to be called Emily or Em, went to school at Prince of Wales College and Normal School to become a teacher, receiving her third class teacher's license in 1898. At some point she had a change of heart and decided to become a nurse.

In 1908 Emily moved to Boston and began studying as a nurse at the Women’s Charity Club Hospital. The W.C.C. was “a hospital for destitute women” (Verbrugge 92) on Parker Hill Avenue in Roxbury (Boston) Massachusetts. The 1910 U.S. Federal Census confirms that Emily had moved to the United States in 1908 and was working at the Hospital in 1910, the year she graduated.

The UPEI book, A Handbook of Obstetric Nursing for Nurses, Students and Mother, by Anna M. Fullerton, M.D., published in 1904, was signed by Emily:

After her time working in the hospital Emily worked as a private nurse for wealthy families in the Boston area. According to the 1916 city directory, Emily was still working as a nurse, living at 11 William Street, Somerville MA. Living with her were her sisters Christina and Jean, also nurses.

In the 1921 Census of Canada, James and Emeline, were living in Eldon PEI with their daughter Jean (7 months old) and James’ widowed mother, Annie Haleday, age 75.

Jean Rowan Halliday was born on 10 October 1920. She was baptised in the Presbyterian Church in Belfast on 24 April 1921. She went to Prince of Wales College to become a teacher and continued her education at Mt. Allison, receiving a B.Sc in Home Economics in 1950. Following her time at Mt. Allison she took a job as an assistant dietitian at the sanatorium in Charlottetown. Later she taught home economics at a high school in Sackville, New Brunswick, followed by a job in Alberta with the Department of Agriculture (home economics extension service). PEI eventually called her home and after receiving her PhD she became a home economics professor at the University of Prince Edward Island. In 1964 she married Wendell MacKay of Stanley Bridge PEI. They had two children, Kenneth and Flora. Jean wrote a book about growing up in Eldon PEI, called “The Home Place: Life in Rural Prince Edward Island in the 1920s and 30s.” It was Jean who donated her mother's nursing book to the Robertson Library. Dr. Jean MacKay died in 2004.

Alice May Halliday born on 5 May 1922. Alice followed in her mother’s footsteps and became a nurse. She moved to the U.S. and entered the U.S. Army Nurse Corp. on 20 December 1944, becoming a 2nd Lieutenant in the Corp. She later married Thomas Brundage, had three children (Thomas, Alan and Donna Jean), and died on 25 July 1996 in New Jersey.

James Franklin Halliday Jr, known locally as Jimmy Halliday, was born in 1924. He was a noted Prince Edward Island fiddler and died in 2009. You can read about his musical legacy on the site Bowing Down Home.

Emily was very involved in her community. She was part of the local Women's Institute and the Missionary Society, and she used her nursing skills to help her friends and neighbours.

In Memoriam- Mrs. J.F. Halliday
On December 20th, Mrs. J.F. Halliday of Eldon entered into eternal rest in her 71st year. The late Mrs. Halliday was formerly Emeline Catherine Moore MacInnes, daughter of the late Mr. and Mrs. Allen MacInnes of Rosebery, P.E.I. She obtained her teacher’s license in Prince of Wales College and Normal School, Charlottetown. Instead of teaching school she went to the U.S.A. and chose nursing as her profession. She trained in the Women’s Charity Club Hospital, Roxbury, Mass., graduated in 1910, and practised nursing until 1918, when she returned to P.E.I. to marry Frank Halliday, Eldon, who predeceased her in 1945.

Until the onset of her illness several years ago, Mrs. Halliday’s life was one of full and happy service, firstly in her home, where she was a devoted and exemplary wife and mother, and secondly in her church and community, where she actively supported every worthwhile effort. She will be remembered as a good neighbor, especially in times of illness and sorrow, and as a sincere friend. With her warm personality and kindly ways she was well beloved. It might truly be said of her that she loved her fellowman, and that she did unto others as she would that they should do to her. She lived her Christian principles in her daily life.

Photo:
Photo from “The Home Place: Life in Rural Prince Edward Island in the 1920s and 30s,” by Jean Halliday MacKay.