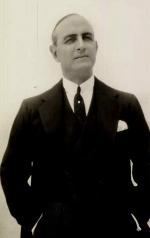 Oscar Benjamin Cintas was born on 31 March 1887, in Sagua La Grande Cuba, to Lorenzo Cintas and Amelia Rodriguez. He had two siblings: Lorenzo and Maria. It is believed that Lorenzo died in World War I, but we have not found any primary documents supporting that claim. We know that Oscar signed up for WWI in Washington D.C, in 1918, but did not likely see any action.

Oscar began his education at the Sagua la Grande Jesuit School, followed by a sponsored education in London, England, most likely between 1904-1908. After studying in Great Britain he travelled back to Cuba and worked at the British Railroad, Empresa de Ferrocarriles. He worked his way up and eventually was put in charge of buying and selling railroad cars and equipment.

Oscar was also an active traveler. His trip to Paris in 1925 was particularly eventful. It was then that he met his future wife, art enthusiast, Dona Graziella Tarafa (1903-1941), however she was engaged to be married to someone else, waiting in Cuba. Regardless, Oscar and Graziella were married on the boat trip back to Cuba, despite the scandal that awaited them at home.

Dona Graziella’s family was well established and honoured. Oscar’s father-in law, Colonel José Miguel Tarafa, was acknowledged as a hero of Cuba’s War of Independence from Spain. Among being on the Cuban Sugar Producers Committee Colonel Tarafa’s family was one of wealth and high social status within Cuba.

Oscar and Grazielle had no children and Oscar never remarried after Grazielle died in 1941. He built a mausoleum in one of Havana’s nicest Cemeteries where she, and later he, was laid to rest.

Between the years 1932 and 1934 Oscar worked as the Cuban Ambassador to the United States. He advocated fairness in trade with the U.S. regarding Cuban sugarcane production and tariffs, and had a talent in economical and political bargaining. He also had an appreciation of American politician, Abraham Lincoln.

Oscar was particularly keen on collecting Lincoln artifacts. He admired Abraham Lincoln's hopes for Cuba to be a peaceful, fair and unified nation. In April 1949 Oscar won a bidding war at an auction and purchased Colonel Alexander Bliss' copy of Lincoln’s “Gettysburg Address” for $54,000, the only copy that was in private possession. Oscar donated the document to the United States Government. Today this document is hanging in the Lincoln Room of the White House.

Oscar was a passionate art enthusiast beyond his fascination with Lincoln. He gathered a large collection of modern paintings, rare porcelain, old manuscripts and books. He planned to build a public art museum for the Cuban people in Havana, but it never got off the ground.

Perhaps in reaction to the failed Museum attempt, Oscar, just shortly before his death, created a foundation to support Cuban-American artists. The Foundation was established to encourage Cuban artistic expressions by giving struggling artists, architects, and creative writers, grants to make their art available to the public. A large portion of Oscar's art collection was sold to fund the foundation. The Foundation was first called the Cuban Art Foundation but changed to The Cintas Foundation in 1963.

Despite his success and privileges fairness and equality was of the utmost importance to Oscar. In his will he donated money to the poor of Sagua la Grande in remembrance of his roots. It was this community, and its large red light district, that triggered him to be an indomitable advocate for social justice issues.

Apart from his large art collection, Oscar had such a huge collection of books that he constructed a separate building to house his library (Weiner 194). After his death the majority of his book collection was donated to the Biblioteca Nacional in Havana Cuba. However, one of his books, A False Utopia: A Collectivism by Theory and Practise, by William Henry Chamberlin, managed to make its way to Prince Edward Island and now is part of the UPEI Provenance Collection. Oscar's bookplate is found on the inside cover of the book. How the book traveled from Cuba to PEI remains a mystery.

From the The Cintas Foundation