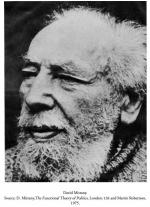 Other Scholars in Princeton University

David Mitrany was born on 1 January 1888, in Bucharest, Romania. He would leave Romania, once he completed his mandatory military service and eventually become a naturalized Bristish citizen. He lived much of his life traveling to and from the Uk and US.

From 1908 to 1911, David was working at a business office in Hamburg, Germany to make money as he took evening classes at Kolonial Institute, which would later became the University of Hamburg. In 1912, he would move to London, UK and enroll in the London School of Economics (LSE). There he would study under L.T. Hobhouse in Sociology and under Graham Wallas for Economics. He would graduate with an unclassified BSc(Econ) Honours War degree in sociology in 1918 and then awarded a PHd in 1929. He would also receive a DSc in Economics in 1931 from the LSE.

Daivd became heavily involved in the war effort after the outbreak of World War I, in 1914. He was a part of the Romanian Legation in London and worked intelligence for the Foreign Office and the War Office. After the war, from 1919-1922, David was part of the Editorial Staff of the Manchester Guardian, he was responsible for forgien affairs.

On 9 June 1923, David married poet and artist Ena Limebeer, they settled in Kingston Blount, near Oxford but would move to America in 1929. David had a visiting professorship at Princeton University and from 1931-1933, he was a visiting lecturer at Harvard University, he would also give lectures at Yale University, during this time.

In 1933, David became the first appointed Professor in the School of Economics and Politics at Princeton University, he was also the only non American. The Institute was an experiment where there were no students or lectures but only scholars.

David was an accomplished writer of many different works, but in 1943, his most famous writing A Working Peace System, a pamphlet was published by the Royal Institute of International Affairs. The pamphlet was smuggled to resistance groups and translated into 3 languages: Itialian, Danish and Norwegian. The LSE library has a collection of papers of eighty two boxes that include articles, notes, lectures, reference material, drafts and more from David between the years 1920-1965.

Daivd would also work with Unilever Ltd. in London, where he was an advisor on international affairs. He was still with Princeton University but would give up his professorship in 1956. In 1967, he would go on a three month tour in the US, stopping at Harvard, Yale, and Columbia to give lectures, talks, and TV interviews.

In UPEI’s Provenance Collection, the book The progress of international government written by David Mitrany has an inscription he wrote to John Allan Irving, “J.A. Irving, with sincere admiration from a fellow student D.Mitrany Princeton, December 1935.”.