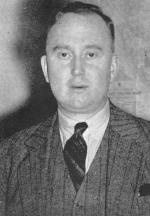 John Allan Irving was born on 6 May 1903 in Drumbo, Ontario, Canada to parents John and Carrie Irving. John is the oldest child, with a younger brother Charlie and a younger sister Margaret.

John’s schooling started in Drumbo but he would attend Galt, Ontario for his high school years. He would then attend Victoria College, Toronto, Ontario in 1922. He was a very talented student and placed first in honours for Philosophy and English for each year he attended and graduated in 1926 with the Regent’s Gold Medal. A year later, he would graduate with a Master’s degree from the University of Toronto.

John would also earn a Master’s degree from Trinity College, Cambridge and after graduation he started teaching at Princeton University, New Jersey. After eight years at Princeton, in 1938, John became the new Head of the Department of Philosophy and Psychology at the University of British Columbia. He would eventually return to his Alma Mater, Victoria College, in 1945, where he taught ethics and social philosophy. During his time at Victoria College, John helped found the Canadian Philosophical Association, where he would act as the Vice-President starting in 1962 and until his death in 1965.

John was well known for his knowledge and teachings in the history of Philosophy in Canada. He was also heavily involved in many Committees and Associations throughout his career. From 1941-1945 he was the President of the Pacific Congress on the Teaching of Philosophy. He was also on the Executive Committee from 1939-1941 for the American Philosophical Association and then Vice-President from 1944-1945.

John was an author and an editor, his most well known writings are The Social Credit Movement in Alberta, and Philosophy in Canada: A Symposium both published in 1952. He was also a part of the Canadian Broadcasting Corporation (CBC) working on radio programs giving lectures and as an Editorial advisor for the series program The Architects of Modern Thought.

Sadly, on 3 January 1965 in Toronto, John Allan Irving passed away after battling an illness for two years.

In UPEI’s Provenance Collection, the book The progress of international government by David Mitrany has an inscription to John, “J.A. Irving, with sincere admiration from a fellow student D.Mitrany Princeton, December 1935.”.