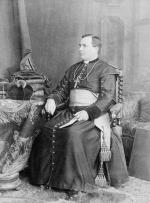 Cornelius O’Brien was born on 4 May 1843, at Grovehill Cottage in New Glasgow, Prince Edward Island, Canada, to parents Terence O’Brien, of Munster, Ireland, and Catherine O’Driscoll, of Cork, Ireland. It is unknown how many siblings Cornelius had but he was close to three sisters, Catherine O’Brien-Campbell, Hanna, and Annie Laurie Hughes and his brother Laurence. In later years, Hanna lived with Cornelius and their niece Cornelia Hughes. Another niece of Cornelius’, Katherine Hughes, wrote a biography about him after his death titled, Archbishop O'Brien: man and churchman in 1906.

Cornelius started his formal education at St. Dunstan’s College in Charlottetown. He graduated in classical studies in 1864, and then attended the Urban college of Propaganda, in Rome. He studied in Rome for seven years, from 1864-1871, and achieved doctorates in Philosophy and Theology. He would return to Prince Edward Island and become ordained in 1871, where he was appointed to a teaching position at his alma mater, St. Dunstan’s College.

Unfortunately due to ill health, he left his teaching position and became rector of the cathedral of Charlottetown in 1873. Then in 1874, he was transferred to Indian River parish.

In 1880, Cornelius travelled back to Rome with Bishop McIntyre of Charlottetown, and again in 1881, where he accompanied Archbishop Hannan, of Halifax, on a visit to the Pope. Sadly, in 1882 Archbishop Hannan passed but Cornelius was nominated for the vacant see. He was consecrated archbishop in the cathedral of Halifax on 21 January 1883, and was the first native-born Canadian to do so.

After his appointment, Cornelius built the St. Patrick’s Church in Halifax, he would also rebuild and expand the Orphanage of Halifax. In 1885, he opened the St. Patrick’s home, a reformatory and industrial school.

In 1894, Cornelius was asked to read a eulogy for Sir John Sparrow David Thompson, the former Premier of Nova Scotia and the first Roman Catholic to be Prime Minister of Canada.

From 1896-1897, Cornelius was the President of the Royal Society of Canada. He also played a large part in the revival of St. Mary’s College, a Catholic College in Halifax. It was established in 1840 but went through many financial difficulties through the years. In 1880, the annual grant given to the college from the government was cancelled. The college was saved because of a bequeathment given by Patrick Power but there were difficulties with Lawrence Power, Patrick’s son. Lawrence would not allow the college to use the bequest unless Jesuits were in charge of the college. There was a disagreement between the archbishop and the Jesuits order superior in Canada, so the bequeathment was denied. Cornelius would challenge Lawrence’s decision in the Nova Scotia court and was successful but the decision was later overturned in the Supreme Court of Canada, in 1903. St. Mary’s College would reopen in 1903, but without the involvement of the Power family.

Cornelius also helped to found and establish french college, Collège Sainte-Anne, in Church Point, N.S., as well as, twelve churches, nine parochial schools, and his diocese contained eighty churches, forty priests, and eleven convents. He was also a published author of many books, poems, and articles. Some of his book titles include, Philosophy of the Bible Vindicated, 1876; Early Stages of Christianity in England, 1880; Mater Admirabilis, 1882; After Weary Years, 1885; St. Agnes, Virgin and Martyr, 1887; Aminta, a modern life drama, 1890; and Memoirs of Rt. Rev. Edmund Burke, bishop of Zion, first vicar apostolic of Nova Scotia, 1894.

On 9 March 1906, in Halifax, Archbishop Cornelius O’Brien passed away, he was buried in the Holy Cross Cemetery.

UPEI’s Provenance collection has the book, Documents illustrative of the Canadian constitution by William Houston, contains the signature of C. O’Brien.