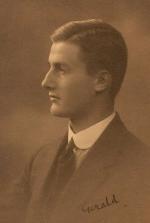 Gerald was educated at Eton College, and in 1908, he received a book as an award from Headmaster Edward Lyttelton. From there, Gerald attended King’s College and graduated with a Classical Honours degree, in 1914.

Gerald enlisted in the military and was Captain of ‘D’ Company, 7th Battalion, Suffolk Regiment but unfortunately on 3 July 1916, he was killed in action. Gerald was awarded Military Cross and Chevalier of the Legion of Honour, he is memorialized on the Thiepval Memorial in France.