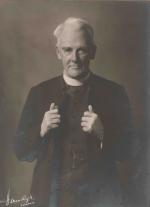 Edward attended Eton College and continued his education at Trinity College, Cambridge. There he played first class cricket, where he was one of five of the Lyttelton brothers to play; they included Charles, George, Arthur, Robert, and Alfred. In 1878, Edward was the captain of Cambridge’s cricket team and he graduated with a Bachelor of Arts. During his cricket career, Edward earned a Blue, an award for university athletes, and played for Middlesex, the Gentlemen cricket team, I Zingari, the Marylebone Cricket Club, and the South of England cricket team.

In 1890, Edward left Eton College and became the Headmaster at Haileybury College. He was also the chaplain of the Bishop of St. Albans, from 1892-1903, and during this time, from 1895-1905, he had the title of canon for the St. Albans Cathedral. In 1894, Edward’s passion for education had him becoming the Chairman for the Council of the Teacher’s Guild and a member of the Royal Commission on Secondary Education. He would also become a member of the Consultative Committee of the Board of Education in 1900.

In 1905, Edward left Haileybury College and returned to Eton College as the Headmaster. While at Eton College, Edward obtained a Bachelor of Divinity in 1907 and a Doctor of Divinity, in 1912. He was also an advocate for co-education and changing the prerequisites for students to enter the college. He was also responsible for students being able to specialize in history, mathematics, modern languages, and science during his time at Eton.

In March 1915, Edward gave a controversial sermon at St. Margaret’s, in Westminster. His sermon was during World War I and he preached not all Germans should be to blame and forgiveness should be given. There was much public protest and eventually in 1916, he resigned from his post as Headmaster at Eton College.

After resigning, he became the parish priest at St. Martin-in-the-Fields, and from 1918-1920, he was the rector of a small village parish Sidestrand, in Norfolk. Edward would go back to teaching in 1920, where he became the Dean of Whitelands College, Chelsea, a women’s college for teacher training. He also acted as Chaplain and lecturer of the Bible for the college.

Edward retired from teaching in 1929 and moved to Norwich. Unfortunately, in 1930, Edward was hit by a car in London after delivering a sermon at Sion College. He sustained injuries to his head, hand, leg, and he was also unconscious for two hours but was able to return home the next day.

For ten years, 1931-1941, Edward would be granted the title of honorary canon of Norwich.

On 23 January 1942, Edward Lyttelton passed away at The Old Palace, in Lincoln; he was aged 86 years.

Autograph Letter Signed from a Reverend teaching at Eton College during World War I. by Edward Lyttelton on Between the Covers. Retrieved from
https://www.betweenthecovers.com/pages/books/414542/edward-lyttelton/autograph-letter-signed-from-a-reverend-teaching-at-eton-college-during-world-war-i