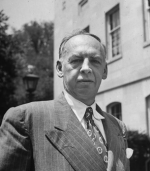 Louis would attend Xavier University in Cincinnati, and St. Mary's College in Topeka, Kansas. In 1912, he would go on to receive his LL.B. from Indianapolis Law School.

Louis played a large role in the labor movement which stemmed from this faith as a Catholic. He would work with the Central Bureau of the Roman Catholic Central Verein, which was a reform-minded and social justice-oriented organization, based in St. Louis in 1915. It was also reported because of his participation in the trade union movement, he was arrested twenty one times but never convicted.

In 1920, the Budenz family moved to Rahway, New Jersey, where Louis worked for ACLU (American Civil Liberties Union) as the publicity director. Louis was also the managing editor of the monthly magazine Labor Age, between 1924 and the early 1930’s. In the years 1928, 1930, and 1934, he would advise striking workers in Kenosha Wisconsin, Paterson, New Jersey, and Toledo, Ohio, respectively. Louis was also teaching labor organizing and strike management at Brookwood Labor College.

In 1931, Louis and Gizella would separate and then finally divorce in 1938. In 1934, Louis served as the national secretary for A. J. Muste's Conference for Progressive Labor Action, later known as American Workers Party.

In 1935, Louis became a member of the Communist party and a member of the National Committee of the Party. In this time, he would also join the staff of the Daily Worker. Louis was such a loyal supporter of the party, he was given the editor position, replacing Clarence Hathway, who began to have doubts.

Louis would become a devout Roman Catholic, renouncing Communism, in 1945, under the influence of Bishop Fulton J. Sheen. This resulted in him being replaced as editor of the Daily Worker by Morris Childs. He would then contact J. Edgar Hoover, and offer the FBI information about the former communist party. He gave an estimated 3,000 hours to the agents in interviews. The trial of the leaders of the American Communist Party would go on for nine months and it would come to light later on that Louis was estimated to have been paid $70,000 for his information during the trials. He began testifying in 1946, and was called on thirty three different occasions.

Louis would marry Margaret Deaumer Rodgers (1908–2002) and have four daughters. Three were born out of wedlock: Julia M. (1934–2010), Josephine T. (1937–), and Justine. After Louis and Margaret’s return to Catholicism, they baptized their daughters and married in St. Patrick’s Cathedral. Their fourth daughter, Joanna, would be born thirteen months later.

Louis became a professor of Economics at Fordham University and was praised by Joseph McCarthy and his Government Committee on Operations of the Senate by having, “testified in practically every case in which Communists were either convicted or deported over the past three years; one of the key witnesses who testified against... Communist leaders." (Spartacus Educational), when he provided evidence against Alger Hiss and others.

Louis became a published author in 1950 with the book, Men Without faces: The Communist conspiracy in the U.S.A. He would also write three others, The Cry is Peace (1952), The Techniques of Communism (1954) and The Bolshevik Invasion of the West (1966). He also wrote an autobiography titled, This Is My Story in 1947.

At the age of 80 years, Louis Francis Budenz passed away on 27 April 1972, at Newport Hospital in Rhode Island.

The UPEI Provenance Collection, has a copy of Louis’ novel The Cry is Peace, with the inscription, “To Father James Kelly in honor of Our Lady of Fatima Louis Francis Budenz”, dated Feb 14, 1954.

Thirteenth Census of the United States, 1910 (NARA microfilm publication T624, 1,178 rolls). Records of the Bureau of the Census, Record Group 29. National Archives, Washington, D.C. For details on the contents of the film numbers, visit the following NARA web page: NARA.