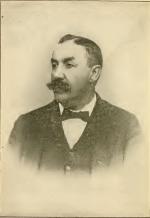 Frank was born in July 1853 in Philadelphia. He was the son of Reuben K. Geyer and Camilla Buck. Frank had an older sister, Anna, and a younger sister, Kate. A younger brother, William Henry Geyer, was born in 1856 but died before his first birthday.

On 9 March 1885, thirty-one year old Frank married Mary Elizabeth Billey at the Methodist Midtown Parish Church in Philadelphia. By this time Frank was already a Police Detective at the Philadelphia Police Department.

Frank became a renowned detective and in 1894 was assigned to investigate the notorious Holmes-Pitezel Case.

Herman Webster Mudgett, alias H.H. (Henry Howard) Holmes, was a notorious serial killer who built a hotel to accommodate people attending the 1893 World Fair in Chicago. The building was a mixed purpose building with street level shops and living accommodations on the upper floors. Holmes built the upper floors to be a place of torture. There were dead end hallways, hidden rooms with no doors (but traps in the floors), sliding doors, gas pipes, a sound-proof room with steel plating, and a body-sized dumping shoot that led to the basement. The basement held quick-lime vats, a large oven, and a dissecting table.

Eventually Holmes admitted to 27 counts of murder but many believe this is only a tiny portion of the real number.

By 1894, Holmes was on the run. On top of his many murders he was also a swindler and was a suspect of multiple counts of insurance fraud. Benjamin Pitezel was his fraud partner and together they concocted a plan to defraud the Fidelity Mutual Life Association of Philadelphia. In order to claim the full amount of insurance fraud for himself, and perhaps to silence a man who held many of his secrets, Holmes murdered Benjamin. It is uncertain if Benjamin had been aware of Holmes' murders, but he certainly was aware of his swindling nature on many accounts.

Holmes then confronted Benjamin’s wife, Carrie, and told her of their plan to cheat the insurance company. He did not mention Benjamin’s death, only the plan to “play dead” in order to receive the money. He convinced the unsuspecting Carrie to allow him to take her daughter Alice to “identify the body” so they could claim the money. In order to protect her husband, who was already knee deep into the scheme (or so she thought), she let Alice go. Once she received the money, Holmes returned and convinced her to hand over two more children so they could stay under the radar until things calmed down. At the same time he, unbeknownst to her, robbed her of a large chunk of the money she had received for the “fake" death of her husband. Unaware of the crime, she let her children, Howard and Nellie, go with Holmes. Still thinking her husband was alive, and promised by Holmes that they would reunite when things looked clear, she waited for instruction on where to go with her last two children, sixteen year old daughter Dessie and 18 month old son Horton.

Eventually, Holmes made his way to Indiana with the three children. There he murdered young Howard. His burned and dismembered body was found in Holmes' rental home in Irvington, Indiana. Afterwards he stopped in Detroit and then onwards to Canada where he killed Alice and Nellie and buried them in the basement of his rental home in Toronto, Canada.

Detective Frank Geyer meticulously tracked Holmes footsteps, and murders, and apprehended him near Boston, subsequently stopping Holmes from completing his plan to kill Carrie and her remaining two children. Mrs. Pitezel, Dessie and baby Horton had traveled there on Holmes' request, still hoping to meet up with Mr. Pitezel, who at this point had been dead for many months.

H.H. Holmes (Herman Webster Mudgett) was found guilty of four counts of murder and six counts of attempted murder, although he admitted to killing twenty-seven people. He was hung for murder in Philadelphia, at age 34, on 7 May 1896.

UPEI's copy of Frank’s book, Holmes-Pitezel Case: A History of the Greatest Crime of the Century and of the Search for the Missing Pitezel Children was signed by Frank to, H.J. Grasett, the Chief Constable in Toronto. Chief Constable Grasett is mentioned by name in Frank’s book on page 216, and it seems they got on very well:

“The chief [Grasett] assured me that his department would do everything in their power to assist me… Thanking the chief for his courtesy and attention, I returned with the inspector to the detective department, where my old friend Cuddy was assigned to help me in Toronto.”

In 1903, Frank retired from the Philadelphia Police Department and worked on his hobby as an inventor of door fasteners and safety locks. He also founded the Frank P. Geyer Detective Agency.

Frank and Mary had one child, Edna C. Geyer, born December 1886. She later married Orrie C. Strohm in 1908 and had 3 children, Elizabeth, Dorothy and Frank. Little Frank, named after his grandfather, was born on 19 May 1915, just three years before his grandfather died on 4 October 1918, as a result of the Spanish Flu epidemic.

Picture from Find A Grave. https://www.findagrave.com/memorial/25051750/franklin-p-geyer