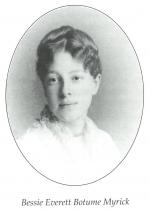 BookLives also hosts a book from the collection of John Botume, Bessie’s father.

Bessie had two older siblings John Frank Botume who, in 1880, was studying to be a lawyer, and an older sister, Mattie, who in 1880 was living at home and working as a teacher. In 1882 Mattie married John Alley and their first child, Elizabeth Botume Alley, born 13 June 1885, was named after Bessie.

The Myrick family made a name for themselves as proprietors of a number of stores and warehouses in Western PEI. The business was started by Edward Merrill Myrick’s father, James Howe Myrick. Following in the footsteps of his father, Merrill successfully kept the family mercantile business alive.

The family, and the village of Tignish, suffered a devastating loss on 30 August 1896. The Myrick mercantile and warehouse burned down during a disastrous fire that all but leveled Tignish.

Bessie’s mother-in-law, Mary Converse Merrill Myrick, wrote to her daughters, in Boston, after the fire:

...we are not “financially ruined”; just at present incommoded for roof room at the Station; but we have all out doors and pleasant weather. The insurance is all right...If the “General Insurance Adjuster”- who came after the Agents “of separate Offices” had given their verdict- thought he was coming to a village occupied by Yankee nincoms, he found his mistake in a very few minutes. In the first place there were the awful ruins- secondly all our books were as clear as daylight, well kept… (Myrick, 36).

Bessie, certainly, was not immune to heartache. Her youngest child, Elisabeth, did not live to see her first birthday. Also, Bessie’s son, Roger, at the age of 14 he came down with diphtheria. He died on 17 November 1903, in Massachusetts. His Aunt Alice (Bessie’s sister-in-law) was at his bedside when he passed on. Bessie would have been 40 years old at the time of her son’s death. Bessie’s great aunt, Elizabeth Hyde Botume, was visiting at the time and wrote this:

Nov. 17- We are overwhelmed with grief- our dear boy has gone. He passed on at 4 o’clock this morning…. He slept quietly until time for nourishment at 3:30. “Aunt Alice, my foot is numb,” he said. She moved the hot water bottle, then he said, “there is something black before my eyes, I cannot see,” before his father and mother could get to him he was gone, the weak heart could no longer hold out. We are dazed. (Myrick 115)

Continuing on, she wrote:

Nov. 18 My birthday.- The great tragedy we have passed through seems to have stunned all. “Can this be true?” is in mind all the time. The house is being cleaned & fumigated throughout. Workers are everywhere… Notes & letters of sympathy with boxes of flowers come to Bessie from every direction. The deep & touching interest in time of affliction shows how good the world is.(Myrick 116)

Bessie’s Aunt Elizabeth returned to her home and school that she had set up in South Carolina to, originally, teach freed slaves after the Civil War. Bessie wrote her a few months after the death of Roger, mentioning that they had bought land on Exeter Street in West Newton, Massachusetts:

I used to think that building a house would be so delightful… It is interesting but with Mama & Roger both gone it seems as if the old enthusiasm & zest had gone too. It’s terrible to have so much taken away in a year. Somehow I think I miss Roger more and more every day. (Myrick, 116).

Three years later, in June 1906, Bessie received the book Dick’s Games of Patience; or Solitaire with Cards from Albert Glidden of Tignish PEI.

By 1910 Bessie, Merrill, John, Rachel and Frank were living together in Newton Ward 3, Middlesex, Massachusetts.

Eleven years later Bessie and Merrill were empty nesters in Lot 2, Greenmount, Tignish PEI. Their neighbours are their son’s families: James, his wife Sibyl, and their young son Roger (named in honour of his uncle who died of diphtheria), and John, his wife (also named) Sibyl, and their 4 children: Mary, Bartlett, Richard and John Jr.

In the 1901 Canadian Census Merrill is listed as a Merchant. In 1910, in Massachusetts, Merrill’s job was a wholesale merchant of canned meats and sea fish. In 1921 Merrill, and his sons, James and John, all list themselves as Merchants of a General Store, proving that Merrill continued to split his time as a wholesale merchant in Massachusetts, and a Store owner in PEI.

Bessie was an avid gardener and kept a notebook describing her gardens over the years. She also enjoyed teaching her own young children and grandchildren, and writing letters.