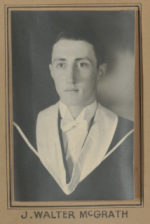 Joseph Walter McGrath was born on 23 July 1919. He was baptised on 3 August 1919 in the St. Simon & St. Jude Church in Tignish, Prince Edward Island. His parents were Gustavus McGrath and Mary Evelyn (Eva) Cahill.

Two months before Walter was to turn two years old, his father passed away, leaving his mother, Eva to look after the four children on her own. However, she was not on her own. In the 1921 Census, Eva and her four children have Gustavus’ mother, Catherine McGrath, and his two sisters Annie McGrath and Ella May McGrath, living with them in their Norway PEI home.

Regardless of whatever hardships they may have faced, Walter’s education was given excellent priority. Both of his aunts who helped raised him in his Norwary PEI home became instructors at St. Dunstan’s College: Annie as a teacher of English and Botany, and Ella May as a teacher of Commerce. The College also operated a High School, of which Walter became a student. On June 30th 1932 Walter, as a grade nine student, received a history award that was handed to him by the women’s charitable organization, Daughters of the Empire. This charitable group provided students with scholarships, bursaries book prizes, and awards.

The book named “Elementary Classics” written by H.M. Stephenson was signed by Walter McGrath. Underneath his name is written “SDU. Freshman. 37 38.”
Walter McGrath graduated in 1941 and then moved to Brockville Ontario to attend military school.

Walter became a Lieutenant and Captain in World War II. He returned to Canada after the War aboard the Ile de France in April 1946.

While overseas he had met and married Mary Dearden of Lancashire, England. She came to Canada as a war bride, according to the front page notice in the 30 May 1946 edition of the Charlottetown Guaridan:

Walter died in 1990 and is buried in Tignish, Prince Edward Island.

Centennial Booklet and Directory of All Students Registered Since January 17, 1855. Published by St. Dunstan’s Alumni Association on the occasion of the Centennial Reunion. August 2 to 5, 1954, p.121.