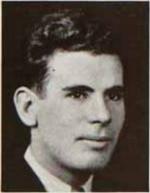 Following his interest in theology, Glendon attended Prince of Wales College, Mount Allison University, and McGill University and its affiliate, Presbyterian Theological College, during the mid to late 1930s. While at McGill, he was a member of the “Rugger” team, the S.C.M. Cabinet, Vice President of a student society, and was also manager of Athletics and captain of the basketball team.

During the summer of 1936, Glendon was a student pastor in Mulgrave, Nova Scotia, which laid the foundation for his career as a Reverend after graduating from McGill in 1938.

Glendon married Gertrude Elizabeth Cooke, who was originally from New York, presumably around 1938. Together they had a daughter named Johanna Bergen Partridge on December 24, 1939 in Kinburn, Ontario.

In 1953, in the midst of the Red Scare, Glendon was chairman of a committee in Montreal that held a vigil to protest the conviction and execution of Julius and Ethel Rosenberg; a married couple accused of conspiring to send information from the United States to the Soviet Union. Glendon’s committee organized the mass picketing of all U.S. consulates in Canada, involving approximately 500 people. Unfortunately, their protest was unsuccessful, and the Rosenbergs were executed. Glendon gave their final eulogy: “‘They died in the name of humanity, truth, and justice,’ the Minister said...He praised the ‘true strength of these people who would not put anything, even life itself, above the best they believed in.’” Evidently, the couple had maintained their innocence while being imprisoned in a “death house” for over two years (Guardian 1953, 5).

UPEI’s Provenance collection’s copy of The Psychology of Shakespeare by John Charles Bucknill has a bookplate on the inside cover which reads: “UPEI, A Gift to the Robertson Library From the estate of Glendon Partridge”.

“Seeking Clemency for The Rosenbergs” The Guardian of the Gulf [Charlottetown] 5 Jan. 1953: 1. Island Newspapers. Web.