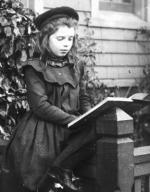 Adèle Whister Newbery was born in Charlottetown, Prince Edward Island on 5 November 1890. Her parents were Arthur Newbery, (born in Italy and raised in Charlottetown) and Ellen (Ella) Newbery, née Malcolm. Arthur was the Provincial Secretary of PEI for over 50 years, and a significant contributor to the development of Charlottetown’s Queen Square gardens, in 1884, in collaboration with the Charlottetown Arbor Society. Arthur and Ella had three daughters: Adèle, Marion (b. 1893) and Florence (b. 1895).

In July 1902, Adèle and her family travelled to Boston, Massachusetts to visit her maternal grandparents, James and Susan Malcolm.

In 1911 Arthur, Ella and their three teenage daughters continued to live at 12 Haviland Street, in Charlottetown. The home that they lived in was designed by PEI architect, William Critchlow Harris, brother to artist, Robert Harris. The home still stands today.

Adèle's mother, Ella, died on Valentine's Day, February 14th, 1920. In the following year's Census, Adèle was working as a clerk in Charlottetown.

At some point between 1921 and 1925, Adèle married Percy Daniel Williams. Their daughter, Ella Joan Williams, was born on 28 June 1925. Her name honours Adèle's recently deceased mother.

Percy passed away on 5 December 1945, leaving everything to his widow, Adèle. Three years later, she became the first secretary-manager of the Charlottetown Bible House; a position that she held for the next twelve years.

At 3:15pm, on Sunday, August 21st, 1962, Adèle passed away as a result of injuries sustained in a car accident. The accident occurred on the corner of McGill Avenue and North River Road in Charlottetown. She was 71 years old.

Within UPEI’s Provenance Collection is the Harper School Classic book, Lord Bacon, by Lord MacAulay. “Adèle Newbery” is inscribed on the inside cover.

Percy Daniel Williams Principal Probate Registry. Calendar of the Grants of Probate and Letters of Administration made in the Probate Registries of the High Court of Justice in England. London, England © Crown copyright.