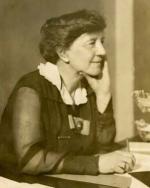 During her London-based childhood, Caroline attended private schools and began her lifelong interest in education. In June 1882, she emigrated to the United States to continue her schooling at Madame Clement’s School in Germantown, Pennsylvania. It was in Germantown that Caroline began her teaching career, in 1885, before relocating to St. John the Baptist’s School in New York. She taught there from 1886-1889, while simultaneously studying Greek through advanced courses at Yale University’s graduate school. Caroline was also a teacher at St. Mary’s School in Burlington, New Jersey from 1889-1890.

In 1890, a woman named Mary Atwater Choate founded Rosemary Hall, a school for girls in Connecticut. Caroline was hired as Headmistress of the school from its beginnings in 1890 to 1938. She also taught classical languages, history, and French there. Evidently, Caroline wished to build a school that promoted the principles of “rigorous academic achievement, competitive athletics, and student self-government” (1900-1971 Rosemary Hall in Greenwich). She also became the first headmistress of an American girls’ school to prescribe uniforms. As for fashion, legend says she boldly wore bloomers on the golf course and carried a pistol.

Although Caroline clearly loved to teach, she was also an avid learner. In 1904, she was accepted to St. Andrew’s University in Scotland where she received a Lady Literate in Arts (LLA) degree, the acceptable Masters in Arts degree for women at the time, who were not yet granted the equivalent of men’s graduate degrees. Caroline then chose to expand her education even further with advanced studies of French literature in Grenoble and Paris; then returning to the United States to receive her MA and PhD from Columbia University in 1909 and 1910, respectively.

Caroline is also recognized for her involvement in feminism and women’s suffrage during the First World War. Women had been campaigning for the right to vote for many years and their wartime contributions and newfound responsibilities, such as taking over men’s jobs while they were overseas, significantly advanced their efforts. Caroline actively contributed to this movement by creating the National Junior Suffrage Corps in 1914, their motto was “Youth Today Tomorrow Power”; she wanted to spark young women’s interest in obtaining the right to vote. She also served as the third Vice President of the American Woman Suffrage Association, participated in the Greenwich Equal Franchise League, and led the Connecticut Division of the Woman’s Committee of the Council of National Defense. In 1934, Caroline’s name was included on a bronze tablet in the Connecticut Capitol building which honours the Connecticut women who fought for suffrage.

Caroline also authored four books in her lifetime: Charles De Sainte-Marthe, The Education of the Modern Girl, Places & Other Poems, and Some Sixteenth Century Schoolmasters at Grenoble & their Delectable Vicissitudes.

Upon Caroline’s retirement from Rosemary Hall, it is probable that she was given a farm house as part of her retirement package. Evidently there is a deed from the Rosemary Corporation that gave her the “‘right to use and occupy’” the property during her lifetime.

Although Caroline never married, she did have an adopted son named Roland (born in Baltimore Maryland, January 1909). Roland shared his name with Caroline’s deceased brother, although we do not know if she gave him this name or if it was given to him by his birth parents.

According to Roland’s US Passport, dated 1923, Caroline signs that she has known Roland personally for the past twelve years (since about 1911). Roland would have been two years old at that time. On the same passport there is a certification notice by Geo. W. Dobbin, M.D. that reads:

I certify that Roland Ruutz-Rees, the adopted son of Caroline Ruutz-Rees, of Greenwich, Connecticut, the child of Mrs. Charles Hill, was born in Baltimore, Maryland, on January 9th, 1909, and that I attended his mother on that occasion.

Roland’s future mother-in-law, Mabel Byrne, was from Prince Edward Island, which may offer a clue as to how Robertson Library came in possession of Caroline’s personal book.

After a very fulfilling life, Caroline passed away on 15 February 1954 at the age of 88.

UPEI’s Provenance Collection’s copy of Asolando: Fancies and Facts, has a sticker on the inside cover with Caroline Ruutz-Rees printed on it. There is also an inscription that reads “To Iney [a nickname for Caroline] in loving remembrance of her birthday, 15th August, from her Aunt Elese” as well as a handwritten date at the bottom of the page “London August 1890”.

Aunt Elese has been difficult to track down. Caroline’s mother does not have a sister or sister-in-law with this name and none of Caroline’s father's siblings have been found. The best guess is that Elese is Louis Emile's (Caroline's father's) sister. When Louis dies, in 1909, he leaves all of his estate to Elise de Longueville, a widow. Elese de Longueville was born in Germany (Louis was born also born in Bavaria). She was married to Charles de Longueville a British Army officer who passed away in 1904.

At the time of Louis' death, Janet, (his wife and Caroline’s mother), was still alive, living in the United States. Janet left Louis behind and came to the United States in 1882, leading one to believe there was a separation, although there is no information found of a record of divorce. The fact that Louis left nothing to his wife or living children further supports this theory, and gives credence to the thought that Elese de Longueville was his sister and Caroline's aunt. The inscription, written by Elese, was signed in 1890, eight years after Janet and Caroline left for the USA.

Caroline Ruutz-Rees, probate date 24 September 1954. Principal Probate Registry. Calendar of the Grants of Probate and Letters of Administration made in the Probate Registries of the High Court of Justice in England. London, England.

Charles de Longueville, probate date 28 June 1904. Principal Probate Registry. Calendar of the Grants of Probate and Letters of Administration made in the Probate Registries of the High Court of Justice in England. London, England.

Louis Emil Ruutz-Rees, probate date 20 May 1909. Principal Probate Registry. Calendar of the Grants of Probate and Letters of Administration made in the Probate Registries of the High Court of Justice in England. London, England.