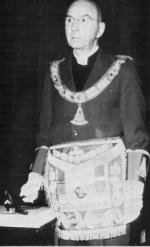 Ernest had a start in business but decided to follow his interest in religion and became a lay preacher. In 1909, he left England for Saskatchewan, CA, responding to a call from the Canadian West for ministers. After two years of field work, as a Probationer for the Methodist Church, Ernest relocated to Wesley College, in Winnipeg, CA, to continue his theological studies.

In 1914, before Ernest could finish his degree, World War I began. He joined the Canadian Army Corps and was in active duty, in France, until 1919.

As soon as he had returned to Canada, Ernest became ordained and took a position at the Union Church in Watrous, Saskatchewan. He continued his work at assorted churches in the West for the next six years before relocating to the United States, and eventually settling in Prince Edward Island.

Reverend Ernest Charles Evans passed away on 24 May 1968.