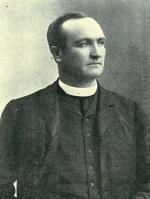 He studied under Reverend Francis J. MacDonald as a young boy, before matriculating to Prince of Wales College. He also attended Saint Dunstan’s College from 1877 to 1880. Upon graduation, Joseph went to the Seminary in Quebec and on 13 June 1886, he was ordained by Cardinal Taschereau in the Old Cathedral of Quebec.

After his ordination, Joseph was appointed to the parish of East Point and St. Margaret of Scotland’s church until 1890. From 1890-1900 he served at St. George’s church, PEI. He was then assigned to Summerside for a while but eventually made his way to back to Kings County, acting as Pastor of St. Mary's Parish in Souris from 1919-1933.

It was during his time as Pastor of St. Mary's that a devastating fire gutted the Church on 10 March 1929. The only thing to survive the fire was the sandstone walls.

Within two months of the disaster, on 10 May 1929, Joseph collected tenders to rebuild St. Mary’s Church, and building was begun before the end of the month. The new St. Mary's Roman Catholic Church of Souris PEI was officially opened with a blessing service which occurred on 7 September 1930.

Reverend Jospeh also acted as an administrator at Saint Dunstan’s College in 1931, and was also appointed the Vicar General of the Diocese by Bishop O’Leary.

Rev. Joseph C. McLean fell ill sometime in July of 1932 and, on 8 July 1933, he passed away. His obituary in the Charlottetown Patriot described him as a man who “enjoyed the friendship and esteem of all creeds and will be sadly missed.” (pg. 1)

“Tenders.” The Charlottetown Guardian. 2 May, 1929. Pg. 2. Accessed through Island Newspapers

Photo from the Souvenir Booklet of the Celebration of the Landing of the Scottish Catholics on Prince Edward Island in A.D. 1772 and After, 1922, p.26.