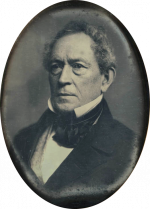 Edward Hill Everett was born on 11 April 1794 in Dorchester, Massachusetts to Lucy Hill and Rev. Oliver Everett. He had eight siblings, of which we've only been able to identify one, Alexander Hill Everett. Edward's seven other siblings remain a mystery.

When Edward was eight years old, his father passed away and his mother moved the family to Boston, Massachusetts.

After a successful early education, Edward entered Harvard in 1807.

He graduated in 1811, as valedictorian of his class. After receiving his Bachelor of Arts, he stayed at Harvard to pursue a Master of Arts in Theology.

On 9 February 1814, Edward became an ordained pastor and preached at the Unitarian Brattle Street Church, in Boston, Massachusetts.

In 1815, Edward was offered a professorship at Harvard, teaching Greek language and literature. This opportunity allowed him to travel to Europe to study French, German, Greek Art, Roman law, and more. He would receive his PhD from Göttingen University, in 1817, and received the noted distinction of being the first American to receive a German PhD. By the time his studies were done he was proficient in German, ancient Greek, modern Greek, Hebrew, Latin, French and Italian.

Edward returned to Harvard, in 1819, and continued teaching.

In 1822, he left his position at Harvard and began a professorship at Cambridge. It was during this thime that Edward would marry Charlotte Gray.

In 1824, Edward was elected to the United States Congress. He remained in the House of Representatives for over a decade.

Edward was elected Governor of Massachusetts, in 1835. During this time, he was responsible for bringing major changes to Massachusetts society. He introduced a state board of education, authorized an extension of the railroad system, and even settled border tensions between Maine and Canada. He would serve only one term as he lost his re-election in 1839, by one vote. After this loss, Edward was assigned the position of ambassador to Great Britain by the Secretary of State.

Edward returned to the United States in 1845 and was made the President of Harvard. Edward remained President of Harvard for three years, despite hesitations about the position. His low expectations were well met, he once stated “When I was asked to come to this university, I supposed I was to be at the head of the largest and most famous institution of learning in America...I have been disappointed. I find myself the sub-master of an ill-disciplined school.” (Harvard.edu) Needless to say, Edward regretted accepting the position of President although he did bring a major research component to the University: Lawrence Scientific School.

In 1849, Edward was appointed the Secretary of State after the death of Daniel Webster. His return to politics was requested by the, then President, Millard Fillmore. Fillmore was the last president to serve as neither a Republican, nor a Democrat.

In the 1850 United States Census Edward is living with his wife Charlotte, three of their children, Charlotte, Edward and Henry, and four other adults, presumably servants. (The census does not indicate their occupation or familial connection). The youngest of these adults are Bridget (24) and Catharine (19) O'Neil. Both of these young women were born in Prince Edward Island. To date this the only connection we have found between Edward and the Island, and it may explain how one of his books, published in 1849, came into our possession.

Edward retired completely from politics in 1854 and began writing a weekly column for the New York Ledger, where he tried to raise awareness amongst the public on various political issues.

Edward's wife, Charlotte, died in 1859, and in the 1860 Census he is living with his daughter Charlotte, her three children, and four domestic servants. The O'Neil women from PEI were no longer working for Edward Everett.

Edward became ill after a speech in Boston, and this lead to his ultimately death on 15 January 1865. He was cremated at Mount Auburn Cemetery in Cambridge.

In the UPEI Provenance collection, there is one of Edward’s books, The Works of the Right Reverend Father in God by Joseph Butler. This book was published in 1849 and inside the cover has Edward’s bookplate which reads, “Patria Veritas Fides, Edward Everett.” This Latin phrase translates to “Country, truth, faith.”

Bugbee, James McKellar. A Memorial of Edward Everett: from the City of Boston. Boston: Printed by Order of the City Council, 1865.