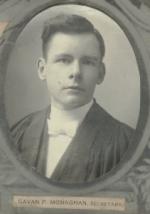 Other Scholars in St. Dunstan's University

After his ordination, Gavan taught philosophy at Saint Dunstan’s University.

On 15 July 1926, Gavan had an immigration visa issued in Rome, Italy on 5 July 1926. On the documentation, he is described as being six feet tall, with a medium complexion, brown-grey hair, and grey eyes. This trip corresponds with the signature found in the UPEI Provenance book, Logique by Cardinal D.J. Mercier. Inside Gavan signed his named, “Gavan P. Monaghan” and dated it “Paris, France. July, 1926.”

Gavan taught at Saint Dunstan’s until he fell ill in 1931 and went to Lake Edward Sanitorium in Quebec; a facility that was created to treat Tuberculosis.

He returned to Saint Dunstan’s University, four years later and began teaching philosophy again. After six years, he was transferred to Oklahoma City, Tulsa and became the superintendent of the Catholic Schools there.

From 1941-1943, Gavan was on staff at Our Lady of Perpetual Health Cathedral.

In April of 1947, Gavan returned to Prince Edward Island and visited his Alma Mater, Saint Dunstan’s. The Charlottetown Guardian wrote about his visit “Rev. Gavan P. Monaghan, former professor at St. Dunstan’s, and now stationed in Tulsa, Oklahoma, visited the college last week. Father Monaghan’s many friends on the faculty and among the students were very happy to see him looking so well, and all wish him continued success.”(pg. 10)

From 1953 until his death, Gavan was a pastor in Chickasha, OK.

During his lifetime, Gavan celebrated his silver jubilee of being ordained and was made a Papal Chamberlain of Pope Pius XII. He was also regarded as “...one of the most widely known priests in the State of Oklahoma, …a noted lecturer, and …recognized as an authority in his field of education” (pg. 5, The Guardian).

Dudley, Eustace. The Challenge: A Story of Conspiracy and the Coming Crash. London: Longmans, Green and Co., 1928.