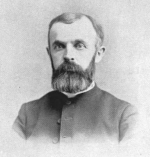 William Herbert Spencer was born in Great Village, Nova Scotia, on 6 June 1855, to Martha and J. F. Spencer. He had at least two siblings, Eldridge F. (b. 1858) and Romelia (poss. Amelia) Anne (b. 1870). William's father, J. F. Spencer, was a farmer and as a result, most of William’s youth and early adulthood was spent on the farm.

In 1872, William represented his Sabbath school at the Maritime Convention in Summerside, Prince Edward Island. The following year he attended Pictou Academy. He would then attend Dalhousie University for four years after which he received a Bachelor of Arts degree in 1881. William continued his education at the Theological Hall (Pine Hill) in Halifax, and then at Princeton Theological College, where received his theology degree in 1884.

Throughout his education William worked as a school teacher in Mount Pleasant, Highland Village, and Nappan.

In April 1884, William was licensed by the Presbytery of Halifax. His ordination occurred on 2 October 1884, in Georgetown, Prince Edward Island and he was inducted into the charge of Georgetown and Montague until 1888.

In 1900, William became the first vice-president of the Interdenominational Sunday School District Association.

By 1905 he was the Minister of St. James Presbyterian Church, in Covehead PEI, one of the oldest church buildings on the Island.

William was a member of the Orange Association Lodge and was the Grand Chaplain of the Order in Prince Edward Island. He wrote an article on the history of the Lodge in PEI in 1905.

According to the 1911 Canadian Census, he was living as a boarder in Queens County, Prince Edward Island, with his wife, Mary.

William was also appointed as an agent of the Maritime Provinces for the Augmentation Fund of Presbyterian Church.

In 1921, William became the pastor of St. Matthew’s Church in St. John, New Brunswick. He remained there until 1925, when several Protestant denominations joined together and created the United Church of Canada.

William retired from the ministry when he was 70 years old. According to his obituary in The Guardian, Spencer was “...recognized as one of the ablest preachers in the Presbyterian Church and regarded as a man of very high intellectual attainment” (p. 6).

On 2 April, 1929, Reverend William Herbert Spencer died, as a result of angina pectoris, in his home on Brighton Road, in Charlottetown, Prince Edward Island.

UPEI’s Provenance Collection holds a full four-volume set of The Ante-Nicene Fathers by A. Cleveland. Inside there is a bookplate that reads Legislative Library gift of Rev. W.H. Spencer.

“The Presbytery on Church Union.” The Charlottetown Guardian, 11 May 1904. Pg. 1. Accessed through Island Newspapers on 14 Novemeber 2016.