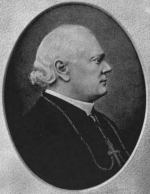 Peter McIntyre was born on 29 June 1818 in Cable Head, Prince Edward Island, to Angus McIntyre and Sarah MacKinnon. He was the youngest of eight siblings.

Peter received his education first from the public school in McAskill River, he then attended St. Andrew’s College, and finished at the Grand Seminary in Quebec.

Peter was ordained on 26 February 1843 by Rev. Pierre Flavien Turgeon in Quebec. He returned to Prince Edward Island and was appointed to be the assistant to Sylvain-Éphrem Perrey at Miscouche. In 1844, he was appointed to Tignish, where he would become the “diocese’s leading pastor” (MacDonald, 1990).

During his time in Tignish, Peter was responsible for overseeing the construction of St. Simon and St. Jude’s Church from 1859-1860.

Peter was named the third bishop of Charlottetown on 8 May 1860. He was a devout Catholic in a time where the voice of Catholicism was becoming very weak.

In 1861, he would begin a ten year campaign in order to a have a Roman Catholic school system, that was separate from the regular school system, funded by the government. In these years, Peter would try all that he could to make his dream a reality but due to his lack of compromising skills, his mission failed. In 1877, the Public Schools Act was passed by the Liberal government and quickly squashed Peter’s vision.

In 1862, he created the Vindicator as a way to strengthen the Roman Catholic voice on Prince Edward Island. It was successful for two years but in 1864, a lawsuit forced them to stop publication.

Peter’s reign as Bishop of Charlottetown would also be very fruitful for the Roman Catholic community on Prince Edward Island. He was responsible for overseeing the construction of twenty-five churches, twenty-one presbyterians, and eight convents. In 1862, he would also oversee Saint Dunstan’s College having its walls converted from wood to brick.

Peter would also be responsible for creating the first hospital in Charlottetown, by converting his old residence in 1879; the hospital had fourteen beds. In order to staff the institutions, Peter reached out to the Congregation of Notre-Dame, and the Christian Brothers and Sisters of Charity of the Hôpital Général of Montreal (Grey Nuns).

Peter also established the League of the Cross in 1888.

In 1889, aware of his failing health, Peter picked his successor despite protest from the Maritime bishops. In spite of their objections, Peter was confident in his decision, going so far as to petition for it during his trip to Rome that year.

On 30 April 1891, Rt. Rev. Peter McIntyre died of heart problems in Antigonish, Nova Scotia, while he was going to the Trappist monastery in Tracadie. His body was transported back to Cable Head, Prince Edward Island in order to be buried underneath the church.

Peter left a very memorable impact on the diocese in Charlottetown. After his funeral, one of his proteges compared him to Nehemiah from the Bible and Peter would be referred to for many generations as simply ‘The Bishop’ (MacDonald, 2003).


Other books in the UPEI Provenance Collection:

Bouchette, Joseph. A topographical description of the province of Lower Canada: with remarks upon Upper Canada, and on the relative connexion of both provinces with the United States of America. London: Printed for the author and published by W. Faden, 1815. [P. McIntyre signature.]

Burton, Edward. A description of the antiquities and other curiosities of Rome: from personal observation during a visit to Italy in the years 1818-19. London: C. and J. Rivington, 1828. [P McIntyre signature, also inscribed “Ep? Carolina polita?”]

Dawson, Rev. Aenas McDonell. The Catholics of Scotland from 1593, and the extinction of the hierarchy in 1603 til the death of Bishop Carruthers in 1852. London, Ont.: Thomas Coffey, Catholic Record Office, 1890. Volume 1. [Peter McIntyre signature. Inscribed above his signature, “Read in an afternoon July 3rd 1907 Wm Cameron 10.O’clock.” Also a card that has “Presented to His Lordship the Bishop of Charlottetown by Thomas O’Gorman Ottawa.”]

Congrégation de Notre-Dame Archives and Marguerite-Bourgeoys Museum. “Our Lady of the Angels Convent.” Faith in Action. Accessed on 22 August 2016.