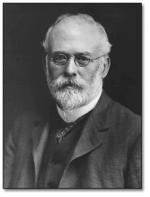 Robert Harris was born on 17 September 1849, in the Vale of Conway, North Wales to Sarah Stretch and William Critchlow Harris. He had six siblings: Sarah, Thomas James, William, Edward, Margaret-Ellin, and Emmeline. The Harris family emigrated from Wales to Canada in 1858. During the voyage, Emmeline became very sick and died just a few days after they reached Prince Edward Island.

The children were tutored at home and then attended Prince of Wales College until 1863. Afterward, Robert became a surveying apprentice.

In 1867, Robert traveled to London where he decided his true passion in life was art.

In 1872, he noted that Charlottetown was not a place for budding artists. He made plans to move to Boston, where he would be able to further his talent; the first of many travels from Prince Edward Island to various destinations for Robert. He would eventually travel all around Europe, the United Kingdom, and throughout Canada.

In 1883, Robert, who was then living in Montreal, was asked by Sir John A. MacDonald to paint the Fathers of Confederation; his most famous piece. He initially started the sketching in Charlottetown, where the Fathers had met, and then moved back to Montreal to finish the piece.

It is in Montreal, where he would meet his wife. On 28 October 1883, Robert moved into Jane Putnam’s bordering house and met her lovely daughter, Elizabeth “Bessie" Putnam. In his biography by Moncrieff Williamson, it is said Robert was very much infatuated with Bessie. His first pencil sketch of her appears, in his day book, on 7 January 1884. Bessie and Robert wasted no time in furthering their relationship. They became engaged on 12 February 1885, and got married on 22 May 1885 in St. George’s Anglican Church, Montreal. Their honeymoon consisted of a tour of England, Ireland, Wales, France, Holland, and Prussia.

They returned to Canada in 1887, which is when Robert’s career truly took off.

Although Bessie and Robert had no children, they had a beloved dog. The dog was a wire-haired terrier named Tough who was described as an awful dog that bit and fought everyone, even being “kidnapped and bought back for a dollar ransom, paid personally by Robert to the old woman who had stolen the creature” (pg. 126, The Island Painter), but the Harrises loved him dearly.

Another story about Tough comes from the book Robert Harris 1849-1919 An Unconventional Biography by Moncrieff Williamson:

“The Harrises’ fatuous adoration of Tough had now taken the form of providing him with a little suit of clothes - a swallow-tail coat with a handkerchief in the pocket, trousers with suspenders, and a hat with a peaked brim. He walked about Phillips Square on his hind legs… Robert himself took the measurements and cut the paper pattern for the clothes.” (pg. 145)

Robert was a very distinguished artist. He was one of the founders of The Pen & Pencil Club in Montreal, which was established in 1890. He was president of the Royal Canadian Academy of Arts from 1893 until 1906. Robert won several gold medals at different World Expos, and was the first artist to receive the Most Distinguished Order of Saint Michael and Saint George in 1902.

Throughout his life, Robert created several group portraits. His most famous being, The Fathers of Confederation and A Meeting of the School Trustees. The latter was inspired by a conversation he had with Kate Henderson, a one-room school teacher in Long Creek, Prince Edward Island. She indicated that she had been “‘laying down the law to the school trustees and generally ‘talking them over’” (pg. 117, Robert Harris 1849-1919 An Unconventional Biography).

In 1890, Robert became very ill; he would battle this illness on and off until he died on 27 February 1919, at his home in Montreal. His body was transported to Prince Edward Island and was buried in Saint Peter’s Anglican Cemetery, Charlottetown.

Upon Elizabeth’s death on 7 April 1928, the remaining members of the Harris family donated $80,000 ($60,000 in paintings and $20,000 in cash) to the City of Charlottetown with one condition, a public library/museum/art gallery must be built in Merchant’s Square, in memory of Robert Harris. It was designed by James Harris, Robert’s nephew. The building was completed in 1930, and was Charlottetown’s first building dedicated to a public library. According to the Prince Edward Island Public Archives and Records Office, “the library holdings in 1930 included: 7,000 books in Dodd Library, 10,000 volumes in Legislative Library. The new building had room for 13,000 new books.”. The building was demolished in 1962, to make room for a memorial to the Fathers of Confederation, which is now the Confederation Centre of Arts.

Caffin, Charles H. American Masters of Painting. S.l.: Doubleday, Page, 1902. [Two bookplates: “Ex Libris Elizabeth Harris” with a picture of a home with a woman reading inside, the other being a public library bookplate. Inscribed “Robert Harris Montreal for D.A.P. Watt”.]

Laurie, A. P. The Materials of the Painter’s Craft in Europe and Egypt: from earliest times to the end of the XVIIth century, with some account of their preparation and use. S.l.: T. N. Foulis, 1910. [Public Library book plate: “Bequest of Mrs. Robert Harris”, with Elizabeth Harris’ bookplate underneath. Doodles of flowers. R. Harris signature.]