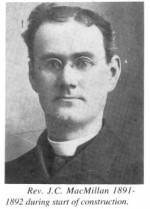 John C. MacMillan was born in Dundas, PEI in 1862, to Flora and John MacMillan. He had three brothers and two sisters.

When John was young, he was taken under the wing of Father Francis MacDonald. In the 1881 census, John is living with Father Francis and three other students. After his time with Father Francis, John went to Prince of Wales College and then directly to the Quebec Seminary. Throughout his education, he was quoted as “brilliant.” During his time at PWC, “he distinguished himself, leading in every brand of his studies.” (Red & White pg. 56-57, 1926).

John was ordained on 22 December 1888, in Quebec. After his ordination, he came back to Prince Edward Island to assist Father Francis, for two years, before being assigned to the Acadian Parish of Palmer Road. Here, he started the construction of the Immaculate Conception Church in 1891. Unfortunately John had to resign from this position before the completion of the church as a result of illness. John had to suspend his duties as a priest for quite some time.

In 1905, after a period of rest, he was assigned to the All Saints Church, Cardigan Bridge, Prince Edward Island. He would publish his book, The Early History of the Catholic Church in Prince Edward Island, a copy of which is held in UPEI Provenance collection, of the same year.

For twenty years, John would go on and off sick leave at the All Saints Church, until he could no longer preach and would retire to the Charlottetown Hospital. John continued spreading the word of God at the hospital until his death on 18 April 1926.

No foreign clime my thoughts could move,
nor land my heart beguile,
The home for me in life and death
is fair Prince Edward's Isle

Within UPEI's Provenance Collection is the book, How Canada Is Governed: A Short Account of Its Executive, Legislative, Judicial and Municipal Institutions, with an Historical Outline of Their Origin and Development by John George Bourinot. J.C. MacMillan's signature is twice written in the book.

Other MacMillan books in the UPEI Provenance Collection:

Thackeray, William Makepeace. The Newcomes: memoirs of a most respectable family. New York: The Hovendon Co., 1855. [J.C. Macmillan pst signature twice and a “The Sacred Thirst” bookmark on page 57.]