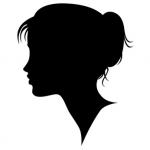 According to the 1916 Census, Roy, Jessie, and three-year-old Jean, were living at 1034 Balmoral Street, Medicine Hat, Alberta, and Roy’s profession was a bookkeeper.

When Jean was 6 years old in 1919, her mother died; this was also the same year her brother, James I. McClure, was born. Sometime later, Roy, Jean and James moved to Prince Edward Island. Roy started up a dry cleaning business in Charlottetown called the New Method Cleaners.

She continued to succeed in education. According to the 1933-1934 Mount Allison Ladies College catalogue, Jean McClure received a book as a prize for being top of her class in Clothing I. This book, Economics of Fashion by Paul H. Nystrom, is housed in the UPEI Provenance Collection. Inside the cover is a bookplate which reads:

The bookplate was designed by Christian Harris, an alumni and subsequent art instructor at Mount Allison Ladies College.

Jean completed her two year Home Economics Certificate in 1934, and that fall, she began at Mount Allison University studying towards a Bachelor of Science in Home Economics.

In the 22 May 1936, edition of The Charlottetown Guardian Jean’s graduation is announced:

RECEIVES DEGREE: Miss Jean McClure of Charlottetown received the degree of Bachelor of Science at the closing exercises of Mount Allison University on Tuesday.

Jean’s father died on 28 June 1939, in Charlottetown. His body was returned to Lethbridge, Alberta so he could be buried alongside his wife Jessie Eastwood McClure. Jean’s brother, James, continued as owner and operator of the family dry cleaning business.

In Prince Edward Island, Jean was involved with Girl Guides of Canada. The Charlottetown Guardian notes she taught the Laundress Badge, among other things, to local Guide Members.

Jean left Prince Edward Island sometime after 1945 and began a career as a dietician in 1950. She accepted a job at the Brandon General Hospital in Manitoba. Being new to the city, Jean began making friends through the St. Andrew’s Presbyterian Church. She rented two rooms in the Manse, from the Minister, Jim Inglis and his wife Esther. Jean lived there until 1959, when she bought a home at 1021 Victoria Avenue East, in Brandon.

Jean also continued to support and educate young women by working with The Explorers, a young Missions group for 8-10 year old girls. They met regularly and wore an outfit of white blouses, navy skirts and red ties. Jean’s faith, and involvement with the St. Andrew’s Presbyterian Church in Brandon, MB, also led her to teach Sunday School to children ages 3-6.

Through the Church, Jean was also involved in banquet catering. In an interview with Jean, outlined in the book, Our Foundation: Memories of St. Andrew’s Presbyterian Church, Brandon, MB, she recalls the Teachers Convention banquet in October 1959. Her memories are recorded by Joan Chrun:

There was an exceptional heavy snowfall that weekend, so David and Andrew Inglis took their toboggan to Jean’s house on Victoria Avenue. There they loaded the turkeys onto the toboggan and the boys and Jean plodded back to the Church with their load, only to find that the banquet was cancelled due to heavy snow!

Jean’s career as a dietician led to her involvement with the Brandon Manitoba Diabetic Group. On 17 January 1964, Jean spoke at the Diabetic Group meeting on proper meal planning for diabetics.

Jean spent the rest of her life in Brandon, Manitoba. She died on 9 April 2005, at Fairview Home. Jean was buried in the family plot in Mountain View Cemetery, Lethbridge, Alberta, alongside her mother, father and brother.

“From the Ocean to the Prairie: Jean McClure interviewed by Joan Chrun”, Our Foundation: Memories of St. Andrew’s Presbyterian Church. Brandon, MB, February 2001.