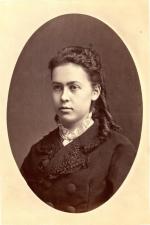 Angie Clara Chapin was born on 7 April 1855 in Auburn, Michigan to Sarah J. Brown and George P. Chapin. She was an only child. According to the 1860 census, her father was a grocer. They lived in Auburn, in the same neighbourhood, until sometime after 1900.

In 1871, Angie started her postsecondary education at the University of Michigan. She graduated in 1875 with a Bachelor of Arts, making her one of the first women from her hometown to pursue a career in academia. Soon after Angie graduated, she became a member of the Literary Department at Flint High School, and remained in that position until 1879.

In 1879, Angie became a teacher at Wellesley College to fulfill the need for a Greek scholar. Angie quickly excelled at Wellesley College, she was described as “one of Wellesley's beloved and outstanding teachers; a devoted classicist and a charming gentlewoman." (Auburn 13021: Angie Clara Chapin). By 1887, she was given a full professorship. In 1901, Angie became a professor of Greek Language and Literature. She was also the head of the Classics department from 1887-1919. Angie would also be the acting Dean of Wellesley College from 1911-1913.

Angie was also an avid member of her community. She was a pioneer of co-education, an advocate for equal rights for women, and was key to the development of the classical department at Wellesley College.

In 1914, Angie left the United States with the intent of travelling through Italy and Greece. During her travels the Great War broke out leaving her no choice but to go back to the United States. In order to get back into the country, Angie had to fill out an emergency passport application. On the application she describes herself as being 5’4”, with a small mouth, a medium forehead, a flat chin, brown eyes, hair that was originally brown but was turning grey, with a ruddy complexion, a straight nose, and an oval face.

By 1920 Clara, age 64, was living on Morris Crescent, Yonkers, Westchester, New York. The Census lists her as “partner" to head of the home, Jesse A. Seeley. Ms. Seeley was a public school teacher in Yonkers. Although we may jump to conclusions about two women living as partners, it really just indicates that they were sharing equal partnership in the renting of the home. The rules for the 1920 enumerators explained that, “If two or more persons share a common abode as partners, write head for one and partners for the other".

Within the following decade, Angie Chapin moved back to her home state. In the 1930 census, she was living as a lodger on Packard Street, Ann Arbor Michigan. The owner of the home was retired clergyman, LeRoy N. Pattison (age 81). Living with him was his daughter Josephine, (age 53) who had trained as a nurse, his sister Martha L. Sturnberg (age 87), and two boarders, Angie (age 75) and Ellen R. Davis (age 86).

On 27 August 1937, Angie Clara Chapin passed away. She was buried next to her parents in Auburn’s Fort Hill Cemetery.