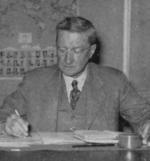 George Douglas Steel was born in York, PEI, on 14 January 1882, to Methodist Minister George Steel and his wife, (Jemima/Jane) Anne Snaith. He is better known, locally, by Dr. G. Douglas Steel the past Principal of Prince of Wales College, from 1936-1949.

The news of G. Douglas' birth made the paper. The 8 April 1882 edition of the Moncton newspaper, The Times, rather unceremoniously noted:

Sometime between younger brother William's birth in 1889 and the 1891 Census, G. Douglas' mother died. His father, Reverend George Steel then remarried on 8 September 1892 in Boston to PEI native, Isabelle Wright.

Rev. George and Isabelle had two daughters, Francis Maud, born on 1 November 1893, and Annie Kathleen, born on 19 May 1896. Unfortunately, Kathleen died on 19 November 1897 of diphtheritic croup. She was 18 months old, G. Douglas would have been 15 at the time of the tragedy.

G. Douglas left his family to attend Mount Allison University. He graduated with a B.A. in 1903. The following year, he received his license to teach in New Brunswick, followed by his first teaching post at Pollett River. He was promoted to Principal of Richibucto Grammar School for the years 1905-07.

After a few years of teaching, G. Douglas opted to further his education. He attended Harvard University between the years 1907-09 and graduated with an M.A.

UPEI's Provenance copy of the Volsunga Saga, edited by H. Halliday Sparling, includes the signature of G.D. Steel. Below his name is written 308 Harvard St., Cambridge. This home was just down the street from Harvard University, and G. Douglas would have lived there during his years at the Ivy League school. It is not dated, as most of his signed books are, but the narrowed years are 1907-09, the years he attended Harvard.

Upon graduation, in 1909, G. Douglas joined the staff at Prince of Wales College, in Charlottetown, PEI. In 1914, he became the Vice-President of the School and continued to teach English.

G. Douglas and Mary settled in Charlottetown on Euston Street. On 2 September 1917, they had a son, Robert George Douglas Steel.

He was a well-respected professor. In the December 1936 edition of the College Times he was unofficially voted “Most Interesting" professor by canvassed students.

G. Douglas continued as Vice Principal of PWC for 23 years, from 1914-1937. He rose to the position of Principal upon the death of Samuel Napier Robertson, who held the position for 36 years. S.N. Robertson was also the namesake of the UPEI Robertson Library.

G. Douglas retired in 1949, however, he kept busy in his retirement. He was President of the Prince Edward Island Music Festival Association from 1951-55. He was a member of the Board of Governors of the CBC from 1946-1957. He was also an involved member of the Trinity United Church in Charlottetown.

His legacy, however, will always focus on his talent in academia and teaching. His retirement announcement in the College Times, dated 24 November 1949, says:

His contribution to the interests of higher education in this Province has been outstanding. The alumni and students of Prince of Wales will always remember him with affection and esteem.

Dr. G. Douglas Steel died in Sackville, New Brunswick, on December 1978. His funeral was held in the Mount Allison University Chapel, where he had been one of the oldest alumni up until his death.

He was survived by his wife, Mary (Mae), his son Dr. Robert G.D. Steel, a mathematics professor in Raleigh, North Carolina, and a granddaughter, Marcia Steel, a violinist living in New York City. His only grandson, Jonathan Chester Steel, had died an accidental death while he was studying at the University of Toronto, only a few years earlier.

Other G.D. Steel books in the UPEI Provenance Collection: