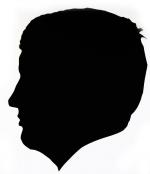 Theodore Zhivkovitch was born on 15 October 1878 in Yugoslavia, and he grew up speaking Serbian.

He studied at the University of Vienna and then completed his PhD at Sarbonne of Paris.

He immigrated to the United States of America, in 1906, and eventually settled in Chicago, IL.

Theodore became the American correspondent for Serbian, Croatian, Russian and Slovak newspapers. He also wrote in American newspapers highlighting the Slavic point of view, in regards to the Balkan issues during WWI. On 31 October 1915, he published an article, titled The Balkans in the Chicago Tribune. The article can be read online here.

On 7 June 1918, Theodore Zhivkovitch married Marie Wychodilova, who had immigrated to the U.S. from Czechoslovakia in 1903. They were married at Lake County, Indiana. Their only daughter, Olga, was born three months later, on 23 September 1918.

Eleven days before his daughter's birth, Theodore registered for World War I. On the document he is described as tall, medium build, with brown eyes and black hair. His occupation is listed as Foreign Managers Department for the Elgin Motor Car Company.

By 1924, as a result of the recession, the Company went bankrupt. As for the War, it ended only a few months after Theodore was registered. There has been no indication found that he ever served, he would have been just shy of turning 40, when he signed up for the war.

In the 1930 Census, Theodore, Marie and Olga (age 11) were living on Woodlawn Avenue, in Chicago. Theodore's occupation was listed as salesman. Ten years later, according to the 1940 Census, the family were still living on Woodlawn Avenue and Theodore was working privately in social services. In fact, on Theodore's WWI registration papers in 1918, his address is listed as 6143 Woodland Avenue, Chicago, IL, and as late as 1946, the family were still there; according to an Olga related Passenger List. For around 28 years, they remained in the same residence.

In the early 1940's, Theodore also registered for WWII. Again, Theodore's occupation takes a radical change. He is working for Dr. I.V. Sollins, and the Chicago Venereal Disease Program, at 54 West Hubbard Street in Chicago.

Alongside his many and varied occupations, Theodore was also a prominent leader of the New Slav Movement of Chicago.

Theodore's daughter, Olga, attended Wellesley College in Massachusetts. Later in life, she was employed in the Displaced Persons department of the Unitarian Service Committee, working in Greece and the Middle East.

Other books housed in the UPEI Provenance Collection, and signed by Theodore Zhivkovitch: