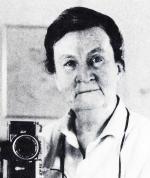 Eleanor was born in Montour Falls, New York, on 8 August 1894, to David Coyle Blair, a coal dealer, and Annie Whitmore.

Along with her parents, Eleanor also grew up with her aunt Almira Whitmore, who lived in the house with them until Eleanor was at least 15. A younger brother, Albert, joined the family when Eleanor was eight years old.

Eleanor attended Wellesley College. In her first year (1914) the College Hall burned to the ground. During her time as Alumni President for the Class of 1917, Eleanor found the beautiful, original, College Hall columns piled up in the Grounds Department service yard, and she fought to have them reinstated as a memorial to the loss attributed by the fire. In 1972, the fragments were reassembled and placed close to their original location. Thanks to Eleanor these columns still stand today.

Eleanor wrote and compiled the book, Wellesley College and Community, in 1974, using her own photographs of her alma mater school.

During World War II, Eleanor was employed by the National Defense Research Committee, working on publications at the Massachusetts Institute of Technology radiation laboratory.

After the war Eleanor went into teaching. She taught at Salem College in North Carolina, Ferry Hall in Illinois, Masters School in Dobbs Ferry New York, the Bancroft School in Worcester Massachusetts, and Dana Hall in Wellesley Massachusetts. At Dana Hall Eleanor was the head of the English Department, until 1943.

Eleanor was a very close friend of poet-novelist, and lesbian icon, May Sarton. According to Sarton's biography, by Margot Peters, Eleanor assisted May as her “editor, proofreader, and typist, as well as house sitter and confidante. Eleanor also took good photographs of Nelson [May's home], the cats, and May at work, contributing tangibly to the myth May's life would become. She [Eleanor] was a cheerful, gregarious person...". (Peters 256).

Eleanor also illustrated some of May's books with her photographs, including the book of poems, As Does New Hampshire.

Cecile de Banke, a professor of speech at Wellesley College was Eleanor's long-time companion. According to the 1940 U.S. Census, they lived together in Eleanor's home at 25 Cottage Street. Cecile did not particularly like May Sarton which put a wedge between Eleanor and May. Upon Cecile's death, the friendship was revitalized, but early tensions were hashed out in a letter written by May, addressed to Eleanor:

I think... I hope... that we have been useful to each other, for after Cecile died, you needed a creative person in your life...I provided a central person when you needed that most. But I believe you knew from the start, after C's death, that you could never be that for me. And almost at once there were angry times when I felt caught in a relationship in which I could not function as my total self, a relationship which gave me so much that I was always in the position of being ingrate...

Where we stand now is truly united toward the work of a writer in whom you have faith... There is no one to take your place there... slowly and by sheer understanding, by thinking and feeling so deeply with the poet, you have come to stand inside the work itself, the heart of the work, as no one else ever has or ever will. How to measure what this means?... I have many friends. I have had many lovers. I have never had anyone who does what you do for me in my work. There, it seems to me, we each serve something greater than either of us... I love you more than ever now this is said. (Peters, 275-276).

According to the letter, it appears that Eleanor had a significant influence on the writings of May Sarton.

In her advanced age, Eleanor went blind. In May Sarton's memoir After the Stroke. A Journal, May spoke of her visit to Eleanor's home on 21 December 1986:

It was walking right into life to walk into Eleanor Blair's little house in Wellesley and to be warmly welcomed- and there was such a Christmasy feeling everywhere I looked: a tiny tree in the front parlour, already decorated with presents around it. Eleanor's eyes were shining and we had a good talk over our sherry, but Mitzi, her cat, was no where to be seen and did not come up from the cellar while I was there. Eleanor still manages alone but what she needs is someone who will read aloud to her. For instance, mail piles up and sometimes it is days before anyone turns up. A regular visitor to do a few odd jobs would do the trick.

Many of the photographs that Eleanor took of May Sarton and her home, “Nelson", are housed in the Wellesley College archives.

Eleanor died on 7 May 1992 in Wellesley, MA. She is buried in the Montour Cemetery, Montour Falls, New York, the place of her birth.

Eleanor's personalized bookplate, alongside her hand-written signature and date of October 1925, can be found in UPEI's Provenance Collection book, English Literature from the Beginning to the Norman Conquest, by Stopford A. Brooke, published in 1921 by MacMillan and Co., Ltd.

“55 Years After Their Graduation, the Class of 1917 Saved a Piece of Wellesley History" Retrieved 20 April 2016

Photograph of Eleanor Blair by May Sarton. It also appears in Margot Peter's book, May Sarton. A biography., p.256.