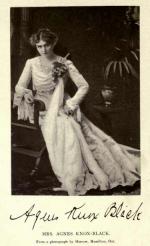 Agnes' early career started as an Instructor of Elocution at the Ontario School of Pedagogy, which was associated with the University of Toronto.

Her fame as a celebrated elocutionist is notable. In 1893, Agnes gave dramatic recitals at the Edinburgh Philosophical Institution. She continued to give dramatic readings across the globe.

In the 7 November 1896 edition of the Cambridge Tribune, it was noted that Agnes gave a recitation at the Cantabrigia Club on Friday, November 13th:

at Epworth Methodist Episcopal church. Meeting In charge of Home department. Mrs. E. H. Cobb, chairman. Recitations by Mrs. E. Charlton Black (Miss Agnes Knox), professor Of elocution at Ontario School of Pedagogy, and dramatic reader to the Edinburgh Philosophical Institute. A "choice mosaic of unhackneyed selections will be given."

A review of her talent as an elocutionist was recorded in the October 1904 issue of Bostonia:

She appeals to the finest and most cultivated audience. An interpretation so intellectual, a voice so sympathetic, a manner so refined and winning, lift Mrs. Black's readings out of the plane of elocution into the higher regions of an art so perfect that it conceals all traces of the process by which that excellence was acquired.

Eventually, Agnes moved to Boston and became the head of the School of Elocution of the New England Conservatory of Music, which later evolved into the Emerson College of Oratory. She remained at Emerson until accepting the Professorship at Boston University.

Agnes took her first teaching position at Boston University, in the 1904-05 year, covering a leave of absence of Professor Bennett. In 1908, she was officially the first woman to be awarded the title Professor at Boston University. She eventually became the Dean of Women at B.U.'s College of Arts.

In 1921/22 she garnered some national attention when she boldly stated that she believed it was every woman's right to “bare knees". She was loosely “quoted" in syndicate newspapers across the U.S., under the headline “A Liberal Lady's Logic" for the audacity of suggesting that “there's nothing wrong with short skirts or bare knees except the person who notices them". The article mocked Agnes' “flawed" logic as such:

“...even if women reverted all the way back to the traditional fig-leaf fashion of Eve's time, they [women] would still be blameless, the only fault being committed by the men who wickedly persisted in employing the eyes nature gave them instead of high-mindedly going about blindfold".

Although Agnes' argument focused more on the objectification of women (rather than the nature of men's eyes), news, at the time, was unable, or unwilling, to support Agnes' point of equality.

These reflections of strong-mindedness certainly add leverage to legends surrounding Agnes, including the suggestion that Agnes was the first woman to climb the Rocky Mountains.

It has also been suggested that famous stars, Vivien Leigh and Laurence Olivier, were guests at Agnes' St. Marys, Ontario farm, thanks to an invitation from Agnes' actor nephew, Alexander Knox.

On 5 July 1945 Agnes passed away the Strathroy Hospital (Ontario) as a result of coronary artery disease. She was buried in the Ivan Cemetery in Middlesex County, Ontario.

UPEI's Provenance collection copy of The Goddess of Reason, a play by Mary Johnston, is signed on the inside cover, by Agnes, with the date of Summer 1907. There is a lovely inscription, pointed to Agnes, a few pages further in:

Shortened to a [unidentified French script] reading at Mrs. Black's suggestion, and given to her by her admiring pupil, in token of her very great help and inspiration.
Blanche Morton Howard

At the beginning of each Act (and there are five), Blanche added these “readings" and passed the work on to her professor.

At the present time Blanche Morton Howard has yet to be identified.

Morgan, Henry James (editor), Types of Canadian Women and of Women Who Are or Have Been Connected with Canada. Vol. I Toronto: William Briggs, 1903, pg. 28.