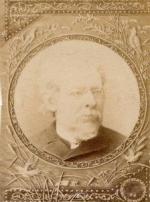 John Wills was born in the spring of 1807. His birthplace is a bit of a mystery since records indicate two different birthplaces: Ireland (1851-1861 England Census, 1870 U.S. Census), and Liverpool, England (John's obituary). The death certificate of John's son, Oswald's says that John was born in Ireland. According to the birth record of his eldest daughter, John's middle name may have been Trenwith/Frenwith but we have been unable to view the original document to verify. John's namesake son, John, also carried the middle name Trenwith.

John was the son of Francis Wills. The name of John's mother remains unknown. Even in John's death record the place to put “mother's name" is left blank. John's father was the administrator of the Quaker Friends School in Newtown-in-Bolland, Yorkshire, where John received his early education.

John married Sarah Myers on 7 March 1831, in St. Mary's Church, Walton-on-the-Hill, Lancashire, England. At the time of the marriage, John was listed as a coal merchant. John and Sarah had eight children: Mary Myers Wills, Catherine M. Wills, William M. Wills, Francis Wills, Frederick Henry Wills, Oswald A. Wills, John Trenwith Wills, and Sarah F. Wills. At the time of John's death, seven had survived; four living in England and three living in the United States. According to his obituary, John “leaves also a score of grand-children and two great-grand-children to whom, as many of his poems witness, he was most tenderly attached".

In the 1851 Census, John and his large family were living in Chester, England, and he was working as a stock broker. Ten years later, they were living in Birkenhead, near Liverpool, and John was a merchant. His obituary tells us that he was a cotton merchant with the company name “John Wills' Sons & Co." and that the company faltered due to the American Civil War, and it's implications on the cotton industry. The company went bankrupt in the fall of 1864. This appears to have spurred on a dramatic life change, as John decided to take his chances working in America.

John came to the United States around the year 1868. He started in newspaper work and in the 1870 U.S. Census, he is listed as a “newspaper reporter", living in Bridgewater, MA. The Census also indicated that he was 63 and living with Frances (female) Wills age 49, who was “keeping house". There was no indication that this was a spouse or not, but there is evidence that she may be his second wife. His obituary tells us that his first wife died in England before he came to America. He married again in the United States, but the second wife died many years before he did. We have been able to find a Fanny Wills (married), who died on 4 November 1871 in Bridgewater. This may be the second wife of John. This loss may have spurred him on to make another dramatic life change. By 1872, John was ordained as a minister.

John pastored churches in Mansfield, MA, Dighton, MA, Saint John, NB, Portland, ME and finally, Barnstable, MA, where he arrived in 1883 and served as the Unitarian Minister for five years.

In his final years, he wrote a book of poetry: Dreamland Visions and Other Poems which he published for private circulation only.

UPEI's Provenance copy of Dreamland Visions and Other Poems, includes a small photo of John and a beautiful inscription to “Robert C. Bililngs, Esq. With the Author's Compliments". The highly ornate writing of Robert C. Billings, in the book can be attributed to John since the Sturgis Library Archives has other, similar, decorative writing by John Wills. John was a beautiful script artist and is, to date, the most stunning example of flourished script in the UPEI BookLives Collection.

From John's book, Dreamland Visions and Other Poems.