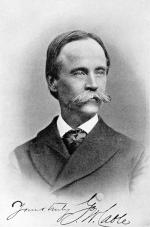 George Washington Cable was born on 12 October 1844 in New Orleans, Louisiana; the second born son, and fifth born child of George W. Cable Sr. and Rebecca Boardman. George and Rebecca's children were Emily (1834), John Edmonds (1837), Mary Louise (1840), Frances Antoinette (1841), George Washington (1844), and James Boardman (1846). During the summer of 1845 the two oldest children, Emily and John, died of scarlet fever. Little George would have been 8-9 months old at the time of this tragedy.

In the late 1840's George's father's steamboat business failed and the family was unable to recover from the blow. The financial woes caused them to accept a meager livelihood. In 1859, with the death of his father, George dropped out of school and took a job as a marker at the custom house, to help support his mother and sisters. Without funds, he gained an education by self-teaching during every precious free hour he could muster.

In 1862, the US Navy came into New Orleans and took the city under Union control. Residents were asked to sign the Oath of Allegiance but George's mother refused. George, his mother and sisters, virtually penniless, were forced to leave their beloved New Orleans.

George joined the Confederate Army in 1863 and fought with the 4th Mississippi Cavalry. He suffered two serious wounds, and dengue fever, but stayed on until the end of the war.

After the war, he returned to his old job as a book-keeper for cotton and tobacco merchants.

On 7 December 1869, George married Louise Stewart Bartlett and the following year they had their first child, a daughter, Louise.

In 1870, the year he was to become a father, he began is first paid writing position as a columnist in the New Orleans Picayune newspaper. By 1871, he was working there full-time. Around this time Cable's social ideologies were evolving. He began to question his loyalty to the Southern way of life. After writing an article condemning a training institute for teachers that taught both black and white students simultaneously, he began to question his stance. The debate that came out of that article helped convince him that he was wrong and he publicly retracted his position. George joined a debate club and further strengthened his new beliefs of racial and social equality. He detested the demoralizing Black Code and fought against the horrific conditions of the southern jails and asylums, which where very racially imbalanced.

Three years later, her was courted by Scribner's Monthly, a Northern newspaper that was interested in stories of the post-war South. He published seven, very successful, stories with the magazine between 1873-1876 and his newly attained Southern abolitionist voice gained popularity.

In 1880, George published his first novel, The Grandissimes, a portrait of Creole life, post Louisiana Purchase, which outlined and, categorically, condemned racial injustice. That same year, George traveled to New York for the first time; he was impressed by the North and returned, with his family, the following year. About that time, he befriended Samuel Clemens (Mark Twain) and Harriet Beecher Stowe. Later on, Cable and Twain would do a reading tour together.

On 18 June 1884, Cable gave a speech in Alabama, denouncing the racist behaviour of the South. The reaction was hostile and the Southern press condemned Cable for publicly shaming and humiliating the South. In 1885, an expanded version of the speech was published in Century Magazine under the title, “The Freedman's Case in Equality". This caused more personal persecution from the South, for Cable, and he decided to move his family North.

George, his wife Louise, his one son (William Noble Cable), and five daughters (Louise, Mary, Margaret, Lucy and Isabel), his mother, two sisters, and a few nieces and nephews, eventually settled in Northampton, Massachusetts. George and Louise's youngest child, Dorothea, would be born in Northampton in 1889.

Cable was a strict Calvinist Christian and he believed that the Social Gospel of Jesus was one of justice, and that was evidence enough for racial equality. He was angered by narrow-minded and hypocritical Christians that used their faith to tear down equality. In 1895, wrote the novel John March, Southerner to outline this hypocrisy, but it was not supported and had minimal effect on the public. Saddened by this indifference and driven to support his family, Cable stopped writing meaningful, radical, fiction, and instead gave the readers what they wanted; mainstream historical romances, devoid of social commentary.

After the death of Eva Stenson, George married Hanna Cowan in 1923. Less than two years later, George died on 31 January 1925. He is buried in the Bridge Street Cemetery, Northampton, Massachusetts.

UPEI's provenance copy of the G.W. Cable novel, Bonaventure was written in 1888, and tells the story of Acadian Louisiana. Cable signed the copy:

The 7 March 1892 edition of The Morning Call, San Francisco, under the heading “The Social World. Resume of Recent Happenings in Society Circles", we find the following note:

Miss Ada L. Bragg clearly attended the enjoyable reception and had George sign the copy of Bonaventure that is now housed in UPEI's Robertson Library. Somehow, through the travels of time, the book made its way from San Francisco, in 1892, to Prince Edward Island, today.