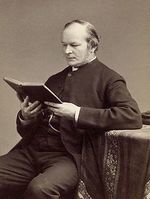 Other Scholars in Anglican Church

Frederic William Farrar was born on 7 August 1831 in Fort of Bombay, India. His father was Charles Pinhorn Farrar, a Chaplain with the Church Missionary Society. His mother was Caroline Turner.

At the age of three, Frederic and his brother Henry, were sent to England to live with their two aunts in Aylesbury. They attended the local Latin school until their parents returned from India. At that point, when Frederic was eight, the newly reunited family moved to the Isle of Man, where Eric and Henry attended King William's College. For the first three years, the family remained together but upon his parents return to India, Frederic and Henry boarded with the College's head master, Rev. Dr. Dixon, and spent vacation time with their aunts, back in Aylesbury.

When his parents returned again from India in 1847, Frederic's father was commissioned at Clerkenwell, a parish in London, allowing Frederic to attended King's College, University of London. He graduated, with a Bachelor of Arts, in 1852.

In 1854, Frederic was ordained deacon by the Bishop of Salisbury. In the same year, he became an assistant master at Marlborough College, a school for the education of the sons of Church of England Clergy, situated in Wiltshire. The following year, he transferred to Harrow School in North West London, where he remained assistant master for fifteen years.

During his years at Harrow, Frederic began writing his first works of fiction, including Eric, or Little by Little, Julian Home, and St. Winifred's, or the World of School.

At the same time he was teaching, he was also attending Trinity College, Cambridge University. Frederic graduated with a Masters of Arts in 1857, after winning numerous prizes and scholarships. That same year, he was admitted to Holy Orders by the Bishop of Ely.

In 1871, Frederic returned to Marlborough College to become Head Master.

In 1874, he published his most famous work, The Life of Christ and two years later Frederic accepted the post of Canon of Westminster and Rector of St. Margaret's. In 1883, he was appointed archdeacon of Westminster.

Frederic traveled to Canada and America in 1885, landing in Montreal on September 13th. He was accompanied by Archbishop Vessey of Huntington and Mr. William Frederick Ingelow, brother to the poetess, Jean Ingelow. They visited Montreal, Toronto, Buffalo, Baltimore, Philadelphia, Washington, Chicago, New York, and Boston.

In 1895, Frederic accepted the position of Dean of Canterbury.

The UPEI Provenance book, The Journal of the Rev. John Wesley, includes a handwritten letter pasted on the inside cover of the book, by Charles H. Kelly, dated 4 March 1891, and addressed to Frederic Farrar. The letter reads as follows:

Will you permit me to offer for your acceptance a copy of Wesley's Work s etc on behalf of this Office. The parcel has been sent to you.
I assure you that your address on Monday at the Centenary Celebration at City Road, gave great delight to the Methodist people; and I trust the fine catholic, christian spirit of it will do much good; and that the effect of your visit will be helpful to the cause of our Great Master.
With many thanks and best regards,
Believe me,
Faithfully yours,
Charles H. Kelly

This letter indicates that Frederic spoke at the “Centenary Celebration at City Road", on 2 March 1891, and that it was met with “delight" by the Methodist congregation. March 2nd, 1891, was the 100th Anniversary of the death of John Wesley.

Two of Frederic's authored books are also in the UPEI Provenance Collection: The Early Days of Christianity and The Life and Works of St. Paul.